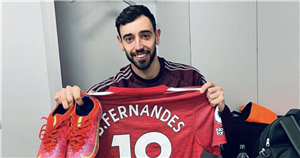 Manchester United midfielder Bruno Fernandes is aiming to raise £720,000 for two sick children by auctioning off the kit from his side’s derby win.

The Portuguese midfielder scored his 23rd goal of the season as he put the Red Devils on the way to beating Manchester City 2-0 at the Etihad Stadium.

It saw Ole Gunnar Solskjaer’s side end their rivals’ 21-game winning run, closing the gap to 11 points at the top of the Premier League table.

But the No.18 is auctioning off the kit and boots from that win for an incredible cause.

Fernandes wants to contribute towards the Portuguese siblings’ surgery, which will cost a huge figure.

Writing on his GoGetFunding page, the midfielder said: “I’ve recently been made aware of Leonor and Jaime’s situation – five-year-old Leonor and Jaime, who is eight, are siblings and were both diagnosed with a very rare cancer, Neuroblastoma.”

It is a rare form of cancer most common in children under five years old, which starts in the abdomen – but it can be treated with surgery to remove the tumour.

“Leonor’s cancer was detected in her first year of life,” Fernandes added.

“Since then, she has had all kinds of treatments and surgeries: chemotherapy, radiotherapy, bone marrow autotransplantation, immunotherapy, ovary cyst and kidney removal, all these over the last four years.

“Jaime, her brother, was diagnosed with the same disease around Christmas last year.”

And it saw Fernandes make an emotional plea, with: “Being a father myself, this kind of story really moves you.

I can’t even imagine the pain and agony their parents must be living right now.

“The good news is the Children’s Hospital of Philadelphia (USA) has been working on an innovative treatment with very positive outcomes.

“However, being a very rare disease with high research costs, this treatment is very expensive: $1 million for the two kids.

“To help them I’ve decided to give the boots and the shirt I wore in today's match against Manchester City.

“Let’s help these kids together! Thank you all!”