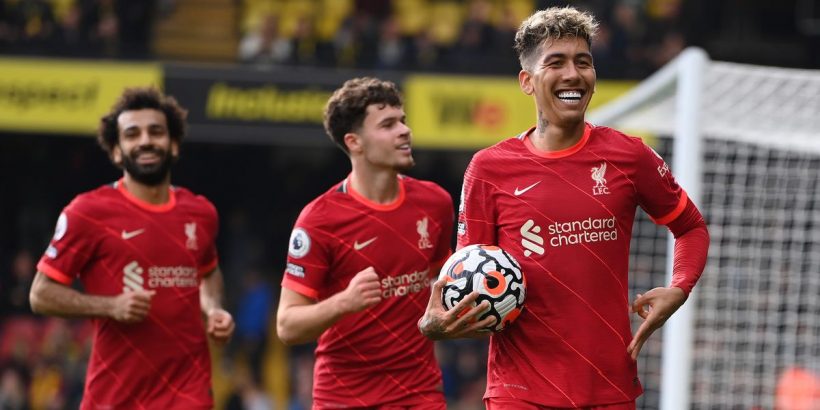 Roberto Firmino was exceptional for Liverpool and grabbed a hat-trick as Jurgen Klopp's side thrashed Watford 5-0 at Vicarage Road.

Firmino started the match after Diogo Jota was benched following a minor injury he sustained on international duty, and the Brazilian took full advantage, grabbing three goals to add to strike's from both Mohamed Salah and Sadio Mane.

The Brazilian also registered an assist to complete a wonderful performance, with his pass feeding Salah who scored a wonder goal to continue his exceptional record-breaking scoring run.

Firmino broke a record himself during Saturday's victory, in what was the perfect day for Liverpool.

Firmino's treble was his second Premier League hat-trick for Liverpool, after previously scoring three against Arsenal back in December 2018 during a 5-1 win at Anfield.

The Liverpool no.9 became the first ever Brazilian to net multiple hat-tricks in the Premier League, and continued his recent goal scoring run after he netted a brace against FC Porto in the Champions League.

Could Liverpool win the Premier League this season? Let us know your thoughts in the comments section below

Only four Brazilian's have ever scored a Premier League hat-trick, as Lucas Moura, Afonso Alves and Robinho have all netted trebles along with Firmino, but the Liverpool star is the first to be able to replicate this on more than one occasion.

Firmino now has four Premier League goals this season, and Liverpool's iconic front three were all on target as they continued their unbeaten start to the campaign.

Klopp's side appear to be back to their best, and with momentum gathering, fans are starting to wonder if they could be nailed on for Premier League success once again.