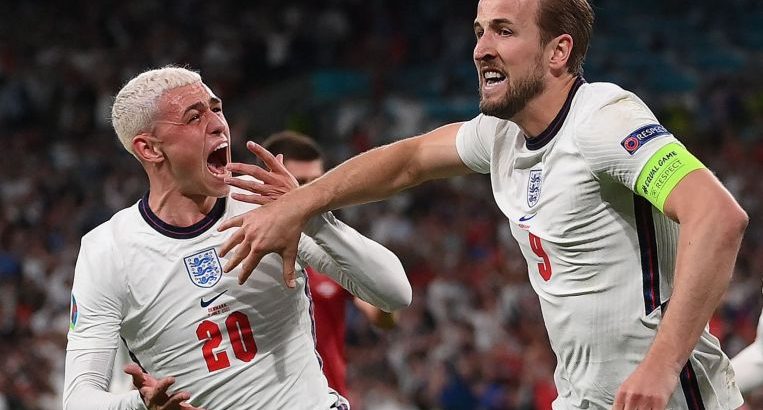 LONDON (AFP) – England fans can at last look forward to a first major tournament final in 55 years after a momentous win against Denmark set up a Euro 2020 showdown with Italy.

Three years on from their defeat to Croatia in the World Cup semi-final, Gareth Southgate’s men overcame the Danes 2-1 in extra time at a rocking Wembley on Wednesday to reach their first European Championship final.

They now stand just one game away from ending their long and painful trophy drought, which dates all the way back to the 1966 World Cup.

Standing in their way are an Italy side who are on a 33-match unbeaten run, reviving their reputation on the global stage after an embarrassing failure to even reach the 2018 World Cup in Russia.

A Wembley crowd of almost 65,000 whipped themselves into a frenzy before kick-off on Wednesday with rousing renditions of “Sweet Caroline” and “Football’s Coming Home”.

Simon Kjaer’s own goal cancelled out a superb Mikkel Damsgaard free-kick and Kasper Schmeichel kept England at bay with some stunning saves to take the tie to extra time.

The decisive moment came late in the first period of extra time when Dutch referee Danny Makkelie awarded a spot-kick for Joakim Maehle’s challenge on Raheem Sterling which survived a VAR check, and England held out to seal the win.

The final whistle sparked scenes of pandemonium inside Wembley – hosting the biggest crowd in Britain since the start of the coronavirus pandemic – as the players partied on the pitch.

Flag-waving fans in London’s Trafalgar Square abandoned their seating to merge into a huge, swaying crowd after the final whistle. One group of supporters climbed on top of a double-decker bus.

For Denmark, defeat spelt the end of a fairytale run to the last four after the trauma of witnessing star Christian Eriksen collapse in their opening group game against Finland following a cardiac arrest.

England have suffered semi-final heartbreak at major tournaments four times since 1966 and those agonising defeats have been etched in the psyche of English football.

But Southgate has overseen the emergence of a vibrant young team unconcerned by the failings of their predecessors.

“They’ve responded to what was always going to be a really challenging night,” Southgate said of his players, who had not conceded a goal until the Denmark game.

“We were so smooth through the quarter-final and relatively unscathed through the second round. We knew that at some point we were going to concede and we would have to respond.”

The semi-final was attended by British Prime Minister Boris Johnson and Prince William, who is president of the English Football Association.

Johnson has refused to rule out the prospect of an emergency bank holiday should England triumph on Sunday.

The prime minister’s official spokesman said: “I don’t want to pre-empt the outcome of Sunday’s match. Clearly we want England to go all the way and win the final, and then we will set out our plans in due course.”

But Kane was determined to stress that nothing was won yet.

“It’s the first time in our history as a nation, getting through to the European final at Wembley, and it’s one of the proudest moments in my life, for sure,” said the forward.

Italy reached the final with a win on penalties against Spain at Wembley the previous night.

Midfielder Marco Verratti said the Azzurri were “climbing back to where they belong” ahead of Sunday’s final, also at England’s home ground after the pan-European tournament.

“It’s the dream you have as a kid as a footballer,” he said. “I think it will be an epic final, history-making either way.”

Away from the mounting fervour, Uefa has charged England over their fans’ behaviour after a laser pointer was aimed at Denmark’s Schmeichel.

Photographs in the British press showed the green light of a laser being pointed at Schmeichel’s face just before Kane’s extra-time penalty.