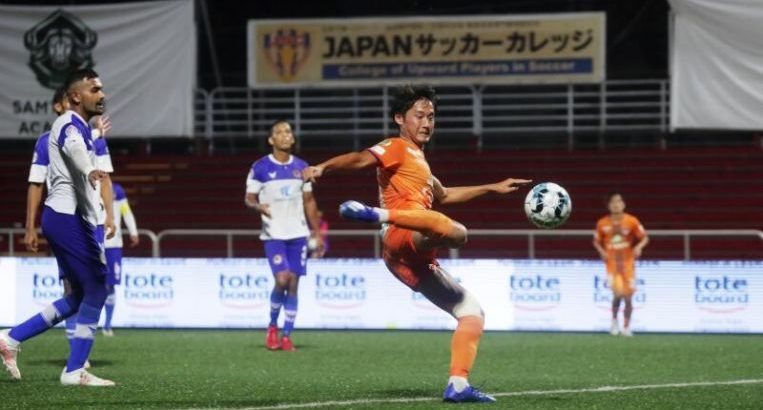 SINGAPORE – As sweat trickled down his forehead and with tape dangling off his left knee, Kiyoshiro Tsuboi was lost for words at the Jurong East Stadium on Sunday (Oct 10) night.

The Albirex Niigata striker had just scored four goals but still did not end on the winning side, as his team were held to a 4-4 draw with Tanjong Pagar United.

The White Swans needed a handsome win to pull off a comeback title win on the last day of the season, having trailed league leaders Lion City Sailors by a goal difference of four.

Albiex’s draw meant the equation did not matter in the end as the Sailors romped to the title with a 4-1 win over Balestier Khalsa.

Asked how he felt, Tsuboi, 21, who was sidelined for four months from May with a serious knee injury and desperate to make up for lost time, said: “I’m very disappointed. I badly wanted to win the title and went into this game with that as the only thought in my mind.”

After Anaqi Ismit gave Tanjong Pagar a shock lead in the 12th minute, Tsuboi scored four times in 25 minutes to help his side to a 4-1 lead at half-time.

Needing another three goals to overtake the Sailors, Albirex instead conceded thrice after the interval.

First Fathullah Rahmat reduced the deficit with a long-range effort in the 63rd minute. Eight minutes later came the turning point in the game, when Tsuboi fired the ball into goal for a fifth time, which was awarded by referee Jansen Foo.

But after furious protests by the Tanjong Pagar players and officials who claimed Tsuboi had committed a foul, Foo reversed his decision, even though his linesman did not flag for an infringement and there is no video assistant referee (VAR) system in the SPL.

Two minutes after play resumed, Anaqi scored from close range to make it 4-3 and in the 86th minute, former Albirex striker Reo Nishiguchi grabbed the equaliser.

Asked about the disallowed goal, Albirex coach Keiji Shigetomi simply said: “You have to ask the referee.”

Tsuboi brushed aside the incident as well, saying: “What we needed was time, and we did not have it.”

Albirex’s players wore glum faces at the final whistle and after receiving their runner-up medals, and general manager Koh Mui Tee said the club will refresh their playing squad for 2022. “As with previous years, there will be a lot of changes.”

As for the future of 15-goal striker Tsuboi, who is on loan from Japanese top-tier side Tokushima Vortis, Koh said: “We would like him to stay, but he is a Tokushima player and they will make the final decision on his future.”

Tanjong Pagar coach Hasrin Jailani paid tribute to his players for the way they ended the season. “When we were down 4-1, it was all down to them,” he said. “To end the season like this shows their character and what kind of team we have here.”