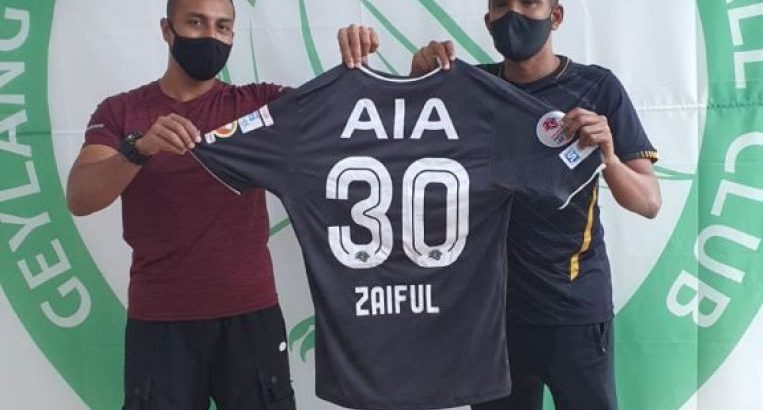 SINGAPORE – A week after being axed by Balestier Khalsa, goalkeeper Zaiful Nizam has been offered a lifeline by Geylang International.

The 34-year-old has signed with the club for the last five games of this Singapore Premier League (SPL) season with an option to extend for the next term, and could make his Eagles debut against the Young Lions at Our Tampines Hub on Saturday (Aug 28).

On Friday, the third-choice national goalkeeper behind Izwan Mahbud and Hassan Sunny said: “I’m very grateful to Geylang International for giving me the opportunity to continue my professional football career with them.

“They are a club steeped in history and I look forward to being part of the team and hope to bring glory to the club.”

The former Balestier captain was sacked by the Tigers after an internal disciplinary inquiry on Aug 18.

This followed his suspension “for his refusal to play” against the Young Lions at the Jalan Besar Stadium on Aug 14 “when called upon to play in the match”.

In that game, Zacharial Leong, 23, started in goal for the first time this season for Balestier. They were 4-0 down at half-time against the bottom side and eventually lost 4-2.

After seeing first-choice goalkeeper Zainol Gulam retire to pursue a career in the public sector and reserve Sanders Saurajen leaving to pursue a dentistry degree in London, the Eagles were quick to swoop for the available custodian, who has three caps for Singapore and played more than 200 games for Balestier since joining them from Gombak United in 2013.

Geylang coach Noor Ali is confident the addition of Zaiful will strengthen the Eagles’ goalkeeping department, which includes Hairul Syirhan and Wayne Chew, as well as their defence.

He said: “Zaiful is a very experienced goalkeeper and I’m confident he will provide that stability in goal as we shore up our defensive unit. We look forward to having Zaiful as a key member of our squad.

“He suits our style of build-up play, and has saved many points for Balestier. We hope he can do the same for us as we aim to finish the season strongly.”

With 16 points from 16 games, the Eagles are fifth in the eight-team SPL. They are five points behind fourth-placed Tampines Rovers, who have a game in hand, and have an outside chance of squeezing into the top four to retain their spot in next season’s AFC Cup, which cancelled its Asean zone matches this year due to the Covid-19 pandemic.