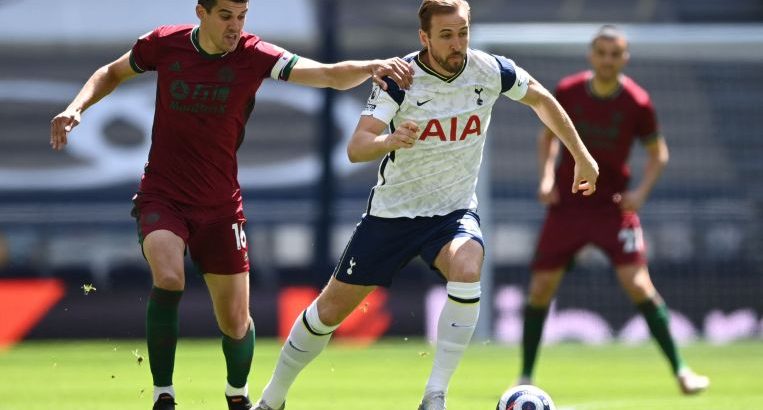 LONDON (REUTERS) – Tottenham Hotspur’s England striker Harry Kane scored his 22nd Premier League goal of the season to help his side to a 2-0 home win over Wolverhampton Wanderers on Sunday (May 16), which boosted their unlikely bid to secure European football for next season.

After Kane’s late first-half strike, Pierre-Emile Hojbjerg grabbed Tottenham’s second just past the hour to seal a victory which lifted Ryan Mason’s team to sixth in the standings.

The performance was a vast improvement from Tottenham’s defeat at Leeds last week, including a promising afternoon from Dele Alli who showcased his attacking skills and tricks as well as getting stuck in with defensive duties.

“We are not happy with where we are, we should be higher and we only have ourselves to blame,” Alli, who fell out of favour under previous manager Jose Mourinho, told Sky Sports.

“We are showing now what we can do but it is a bit too late. We just have to keep working hard and take it into the next season as well.”

Kane, the league’s leading scorer, struck on the stroke of half-time, shortly after seeing Conor Coady block his header on the goal-line with the England defender then also clearing a goal-bound follow-up shot from Giovani lo Celso.

Hojbjerg spotted Kane with space in behind and played in the England captain, who took the ball into the area and showed composure to hold off Coady and deliver a cool finish past a diving Rui Patricio.

Spurs hit the post twice in a matter of seconds shortly after the break but finally doubled their lead when a low drive from Gareth Bale was parried into the path of Denmark midfielder Hojbjerg, who ran into the six-yard box to tap the ball home.

Wolves rarely threatened and Spurs comfortably held on to move to 59 points, within five points of fourth-placed Chelsea with two matches to play. They are one point behind Liverpool, who are fifth with a game in hand. Wolves remained 12th on 45 points.

“Large parts of the game we played well and were organised, good possession. Couple of mistakes. But a tough game. We have to analyse but I’m disappointed with the manner we conceded, too easy,” Wolves boss Nuno Espirito Santo said.

Although Spurs would need a sensational set of results to finish in the top four and qualify for the Champions League, sixth place should be enough to make the Europa League next season following Leicester City’s FA Cup win on Saturday.