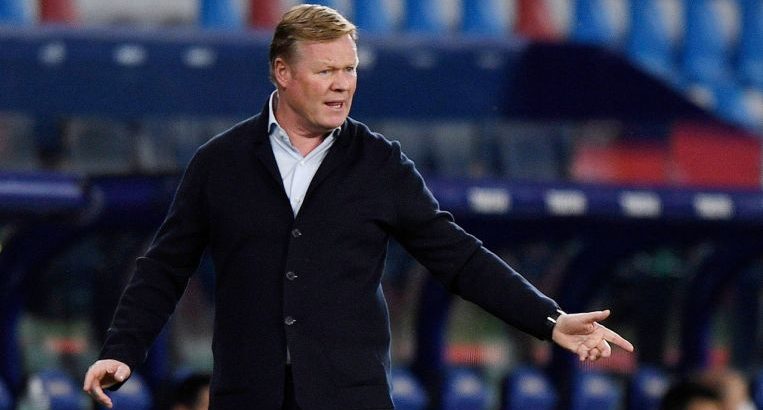 VALENCIA (REUTERS) – Barcelona coach Ronald Koeman said he expected his future at the club to be debated after a horrendous second-half display saw his side slide to a 3-3 draw at Levante on Tuesday (May 11), which severely dented their hopes of winning the Spanish LaLiga title.

“Coaches are always being scrutinised but after a second half like that, I’ll understand if there are questions about me,” the Dutchman told reporters.

“We’re very disappointed and asking ourselves what happened in the second half. But we have to move on and try to prepare for next season.”

Barca would have provisionally gone above title rivals Atletico Madrid at the top of the table had they beaten Levante but instead, they are now one point behind Diego Simeone’s side, who have a game in hand against Real Sociedad on Wednesday.

Real Madrid, in third, will go two points ahead of Barca with two games left in the season if they beat Granada on Thursday.

The Catalans looked to be coasting towards victory after taking a 2-0 lead in the first half through goals from Lionel Messi and Pedri.

But they conceded twice in the space of three minutes after the break and although Ousmane Dembele put them back in front, some poor defending allowed Sergio Leon to equalise for Levante late on.

“We were good in the first half, we played with pace and intensity and got ahead but we lost a lot of balls in dangerous positions in the second half and made lots of errors in defence,” Koeman said.

“We reacted after it was 2-2 and got the goal but we made it too easy for them to score. Conceding three times in 45 minutes is not the level you expect from Barca.”

Koeman was one of Barca’s best-loved players for his role in securing their first-ever European Cup in 1992 and he left his job as Netherlands head coach to take charge of the Catalans last August after Quique Setien was sacked.

Barca made a dismal start to the season and Koeman admitted in January that his side were practically out of the title race.

They hauled themselves back into contention by winning 16 games out of 19 but have undone their hard work by taking five points from their last four matches, losing 2-1 to Granada last month while drawing 0-0 with Atletico on Saturday.

“Our objective was to win our final three games and see if the others dropped points but now it’s very difficult,” added the coach.