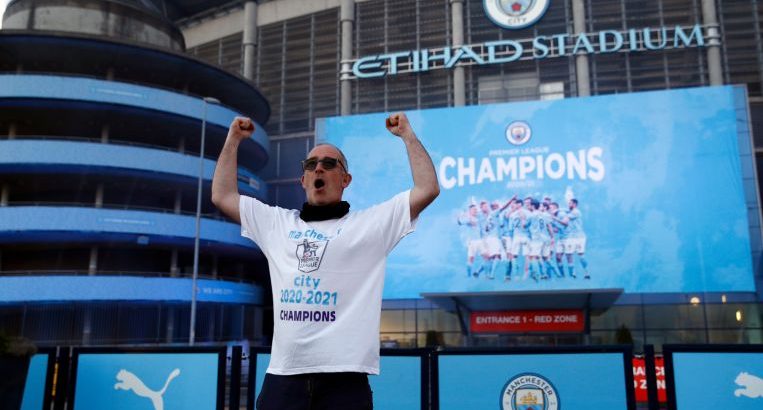 MANCHESTER (AFP, REUTERS) – Caglar Soyuncu’s second-half goal saw Leicester beat Manchester United 2-1 on Tuesday (May 11) in a result that confirmed Manchester City as Premier League champions and strengthened the Foxes’ bid for a place in the Champions League.

Luke Thomas put Leicester ahead in the 10th minute at Old Trafford but the visitors’ lead lasted just five minutes, with Mason Greenwood equalising for United.

Defeat left second-placed United 10 points behind City, with only a maximum of nine available to the Red Devils from their three remaining league games this season.

For Leicester, it meant the Midlands club leapfrogged Champions League finalists Chelsea into third place, although the Blues have a game in hand, with the top four at the end of the Premier League season guaranteed a place among Europe’s elite next term.

United manager Ole Gunnar Soskjaer, faced with a schedule of three games in five days, had promised to rotate his squad. And the Norwegian was as good as his word, making 10 changes to the side that beat Aston Villa 3-1.

Greenwood was the only United player to retain his starting position, with Leicester recalling Ayoze Perez and Thomas.

United defender Harry Maguire missed his first league since joining from Leicester in 2019 after suffering an ankle injury in Sunday’s comeback win at Villa Park.

As rain lashed down upon Old Trafford, it was the visitors who took a 10th-minute lead thanks to a superb finish from Thomas, who volleyed a centre from Youri Tielemans back across goal and into the top right-hand corner.

United, however, have made a habit of coming from behind this season and it did not take them long to draw level. Diallo beat Thomas on the right and played the ball inside to Greenwood, whose own neat footwork then allowed him to shoot low past Kasper Schmeichel, the son of United goalkeeping great Peter.

Leicester, however, regained the lead midway through the second half when Soyuncu jumped above Nemanja Matic and met Marc Albrighton’s corner with a powerful header high into the net.

Pep Guardiola’s City side, who missed the chance to seal the title when they were beaten 2-1 by Chelsea on Saturday, are 10 points clear of United, who also have three games left.

It is City’s third Premier League title in five seasons under Guardiola and their fifth in the last 10.

Despite their home defeat by Chelsea at the weekend, City have enjoyed a magnificent turnaround this season after picking up 12 points from their first eight games – their worst start since 2008-09.

Since then they have been head and shoulders above their rivals and since hitting the top have looked unstoppable.

After losing at Tottenham Hotspur in November, they won 22 of their next 27 matches, including a 15-game winning run and a record-equalling 11 successive away league wins.

Guardiola’s side, who were second-best to Liverpool last season, also won a fourth-straight League Cup and can claim a treble by beating Chelsea in this month’s Champions League final.

Manchester United had delayed City’s title celebrations by beating Aston Villa away on Sunday but it was only putting off the inevitable and the party can now start in earnest.

On the other side of Manchester a huge “Champions” banner was draped outside City’s Etihad Stadium.