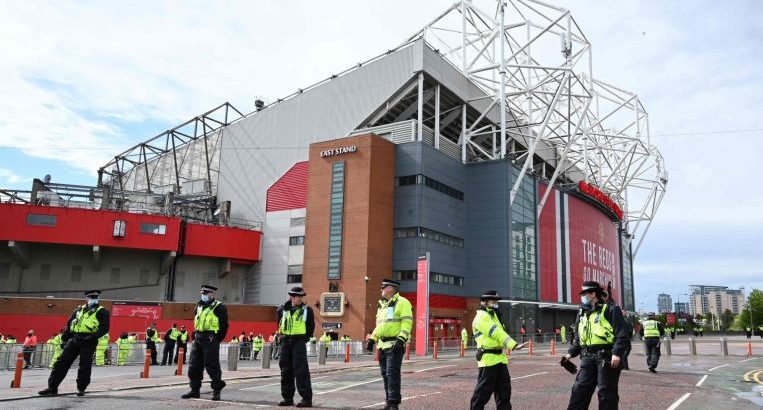 MANCHESTER (REUTERS) – Manchester United erected steel barriers and beefed up security at their Old Trafford ground ahead of Tuesday’s (May 11) Premier League match against Leicester City in an attempt to avoid further violent protests against their American owners.

United’s game against Liverpool last week was postponed after fans, calling for the removal of the club’s owners, the Glazer family, clashed with police and broke into the stadium, entering the field of play.

There was no sign of fans or protesters around the stadium before Tuesday’s game but there was a heavy police and security presence around the venue.

Social media posts suggested protesters were instead looking to Thursday’s rescheduled game with Liverpool for a further demonstration of their opposition to the Glazers.

Steel barriers were erected around the main entrance to the ground and there were increased numbers of private security staff and local police.

The Glazers have faced fan opposition since they took over the club in a heavily leveraged deal in 2005, but the protests were reignited last month due to the club’s involvement in the attempt to create a breakaway European Super League.

In response to the protests and open letters from fans, United owner and co-chairman Joel Glazer wrote to supporters last week to say he is willing to discuss increasing fan shareholding in the club as part of a wider consultation with them.

“We want to work together to come up with an ambitious package of measures which will transform our relationship with fans and strengthen the club for the long-term,” he wrote.

“In this spirit, we will reach out to members of the forum to schedule a meeting in which I shall participate as soon as possible after the final game of the season,” he added.

Tuesday’s game with Leicester is part of a crammed schedule for United, who beat Aston Villa on Sunday. With an eye on the clash with their local rivals Liverpool in 48 hours, manager Ole Gunnar Solskjaer named a second-string side to face the Foxes.