Ole Gunnar Solskjaer felt a “clear foul” was missed in the build-up to the Southampton goal in Sunday’s draw, with the Manchester United manager saying football cannot be allowed to turn into rugby.

Having hit nine without reply past Saints at Old Trafford in February, Ralph Hasenhuttl’s side rallied in front of a first full house at St Mary’s since March 2020.

But Solskjaer left the south coast wondering what could have been, having been annoyed by Jack Stephens’ challenge on Bruno Fernandes before Che Adams opened the scoring via a deflection off of Fred.

The Portuguese was booked for his remonstrations, with the incident coming a day after Liverpool boss Jurgen Klopp told people to “watch wrestling” if they liked some of the challenges Burnley put in.

“We should do better,” the United boss said of his side’s reaction to not getting the free-kick.

“That being said, it’s a foul. He goes straight through Bruno, his hip and with his armpit and his arm across him.

“I’m not worried but we have to look at it because we can’t go from one extreme of volleyball or basketball from last year and go into rugby now.

“I liked the more lenient way, it’s more men’s football but, still, that is a clear foul.

“That being said, you can see early on with the fans as well, it gets the crowd going when you fly into a few tackles and we did suffer a few tackles. That was part of their thinking early on if you like.”

While that decision annoyed Solskjaer, so did the way his side dropped off after Greenwood levelled in front of the raucous travelling support.

“We did well to get the goal, build pressure, good goal and we had another five or six minutes with a good spell,” the United boss said. “And then we lost our way a little bit. 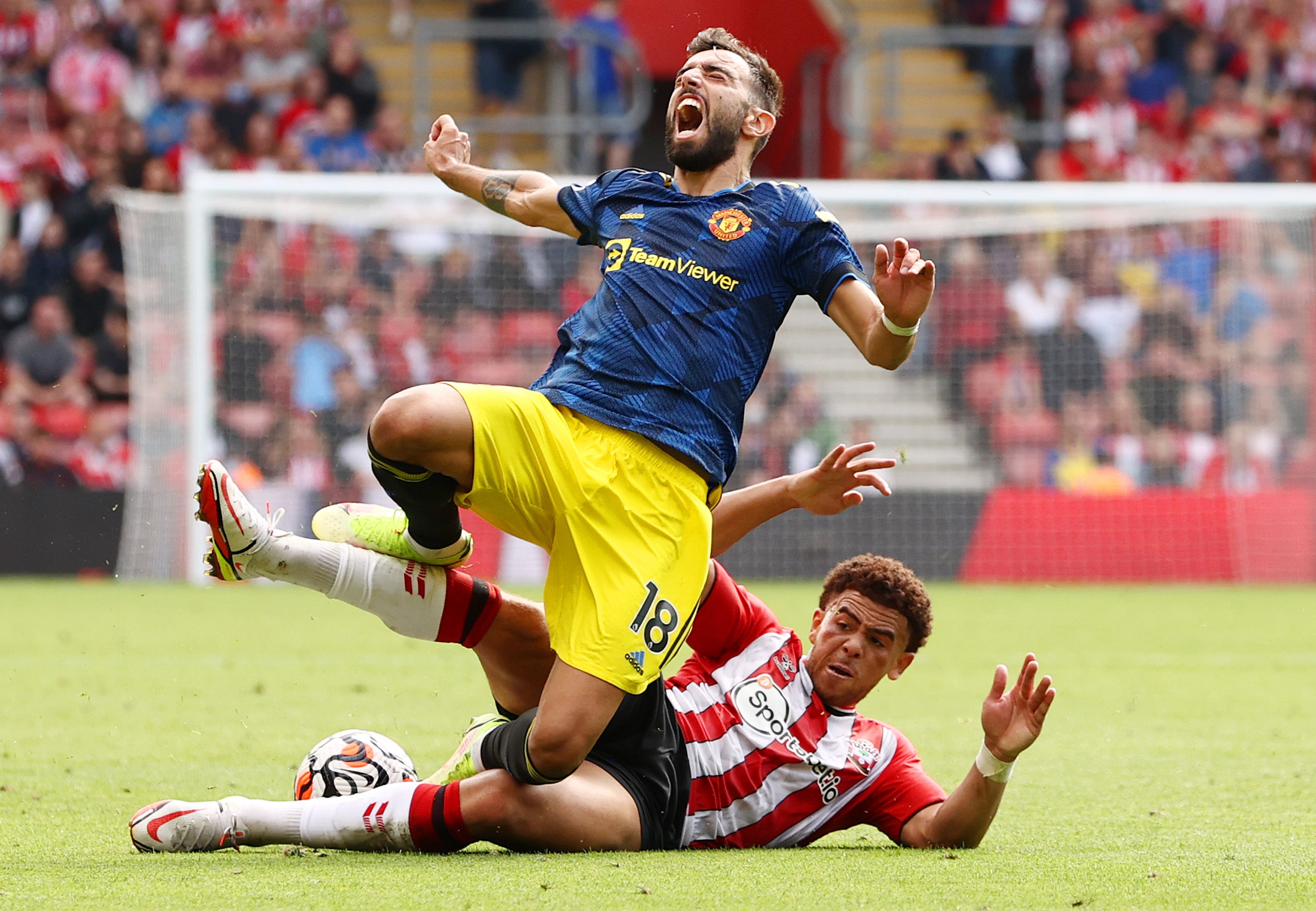 Manchester United were forced to settle for a point

“Maybe tiredness, sloppiness came in anyway and we gave their crowd stuff to cheer about because they had a few counter-attacks and some dangerous moments.”

Adam Armstrong had two chances during that period to give Saints a first home victory against United since 2003, but there were plenty of positives for the hosts after securing a point in front of the returning fans.

“I think it was never a topic in our minds,” Southampton boss Hasenhuttl said of February’s 9-0 defeat to the Red Devils.

“The fans are back and then you have to wake them up. In the end it was good for us. I think we did it with the way we played in the second half, the last 20 minutes.

“After they equalised we thought we shouldn’t lose this game and it was good, important for us that we showed we can be competitive until the end.

“To take something today was very important. First point was important and now we can look forward.”