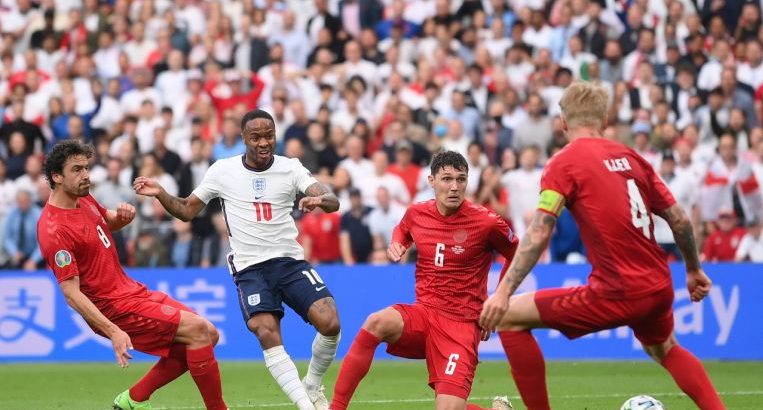 LONDON (AFP) – England reached the Euro 2020 final with a tense 2-1 win against Denmark after extra time at Wembley on Wednesday (July 7).

Fast forward five years and the England fans who had turned Sterling into public enemy No. 1 one were cheering his name to the Wembley rafters.

It was Sterling who carried the biggest threat for England on a night when Denmark’s obdurate defence posed a formidable barrier.

Even in extra time, when England were in danger of being taken to the lottery of a penalty shoot-out, Sterling kept demanding the ball as he probed away at the Denmark rearguard.

The Manchester City winger finally got his reward in the 104th minute when his surge was halted by Joakim Maehle’s foul.

Denmark protested but VAR gave the penalty and Harry Kane fired home the rebound after his spot-kick was saved.

After a troubled season with Premier League champions City that saw him lose his place at times, Sterling has been revitalised with England.

He has scored three times in Euro 2020 and was heavily involved in England’s equaliser against the Danes when his run towards Bukayo Saka’s cross forced Simon Kjaer to turn the ball into his own net.

No wonder England boss Gareth Southgate wrapped Sterling in a huge embrace during the post-match celebrations.

“I thought Raheem was a thorn in their side all night,” Southgate said.

2. Schmeichel defiant until the end

Asked on the eve of the semi-final what it would mean to ruin England’s dreams of Euro glory on home soil, Denmark goalkeeper Kasper Schmeichel had said: “Has it ever been home? I don’t know. Have you ever won it?”

Schmeichel’s cheeky dig was a reference to the Three Lions’ anthem that features the line “Football’s coming home”, which England supporters have been optimistically chanting throughout the tournament.

England captain Harry Kane had responded to Schmeichel’s taunt by insisting his team were in position to finally end their long wait to reach a title match.

It was Kane who had the last laugh as his 104th-minute goal ended Denmark’s brave resistence – but not before Schmeichel did everything in his power to frustrate England.

Schmeichel made superb saves to repel Raheem Sterling’s close-range effort in the first half and Harry Maguire’s looping header early in the second period.

The Leicester goalkeeper also denied Kane when the England captain threatened with a low shot in extra time, then pushed away Jack Grealish’s long-range blast.

The last Danish goalkeeper to have more saves in a Euro match than Schmeichel’s six against England was his father Peter in 1992 against Germany.

Fittingly, the game would be settled with a duel between Kane and Schmeichel.

Schmeichel plunged low to his left to keep out Kane’s spot-kick but the Tottenham striker was quickest to react as he sent Wembley into ecstasy.

With England in desperate need of a quick response to Denmark’s shock opener, Saka showed why Gareth Southgate has such faith in the teenager.

The Arsenal forward delivered a vibrant display in the last-16 victory against Germany before missing Saturday’s quarter-final win against Ukraine with a minor knock suffered in training.

Jadon Sancho impressed in Saka’s absence, but Southgate opted to recall his precocious youngster rather than keep Manchester United’s new signing in the starting line-up.

Any doubts that Southgate had made the wrong call by dropping the more experienced Sancho were erased by Saka in the 39th minute.

He raced into the penalty area and whipped a low cross towards Sterling, with Kjaer’s attempt to block only succeeding in diverting the ball into his own net.

Saka was still having an impact when he was surprisingly replaced by Grealish and will surely have a role to play in the final.