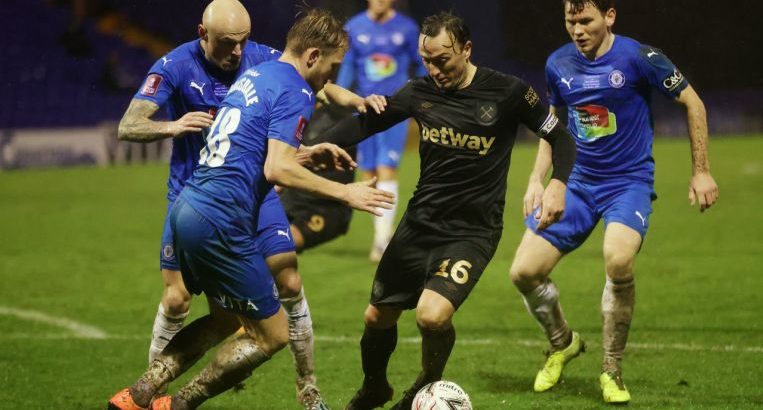 STOCKPORT (REUTERS) – West Ham United laboured into the FA Cup fourth round after a late Craig Dawson header gave them a 1-0 win at National League (fifth tier) side Stockport County on Monday (Jan 11).

The Hammers created few chances on a muddy pitch before central defender Dawson met a Jarrod Bowen cross from the right and steered the ball into the bottom right corner past home goalkeeper Ben Hinchliffe in the 83rd minute.

Dawson was pleased with the outcome and the performance, having stressed that Stockport, who are fourth in the National League, punched above their weight on a cold and wet night.

“It was a tough match,” he told BT Sport. “Stockport are doing great in their league and it’s not easy coming to these grounds – so a great performance from the lads tonight.

“It’s been a while since I’ve played in conditions like that but it’s great to get a goal at the end.”

Said Benrahma and Andriy Yarmolenko fired wide for the visitors in the opening 15 minutes before referee Mike Dean briefly halted play in the first half due to loud fireworks being set off outside the ground.

Dawson spared West Ham from falling behind when he blocked a Connor Jennings shot in the 64th minute and Tomas Soucek headed inches wide for the visitors before Dawson finally forced a brave Stockport side into submission.

“The players are disappointed but I think, ‘Is that not a testimony to how they played?'” he said.

“West Ham had lots of possession but the lads did really well. It was always a stretch for us but the performance showed we are a cut above this level.”

West Ham will next face League One (third tier) side Doncaster Rovers at home and the winners of that tie will book a clash with either Manchester United or Liverpool in the fifth round.