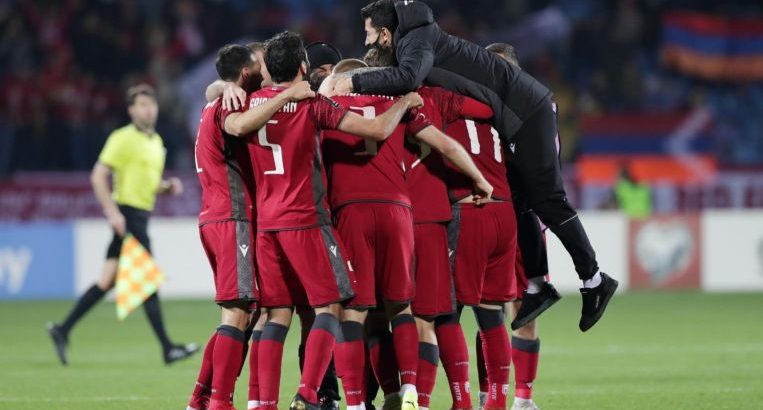 YEREVAN (AFP) – Armenians on Thursday (April 1) were celebrating their tiny Caucasus country’s surprising lead in its 2022 World Cup qualifying group with three wins out of three, lifting their spirits after a devastating war with Azerbaijan last year.

For the first time in the country’s history, its national team on Wednesday took the sole lead in its Fifa World Cup qualifying group after wins against Liechtenstein, Iceland and Romania.

Traumatised by last year’s disastrous defeat in a war with Azerbaijan that has engulfed the country in a political crisis, Armenia’s triumphs on the football pitch have provided some semblance of relief.

“But our team’s victory lifted our spirits, showed that we can win even when the adversary is strong,” he said.

On Wednesday night, Armenians poured into Yerevan’s streets waving national flags to celebrate their country’s 3-2 victory over Romania in a qualifier for next year’s World Cup in Qatar.

Prime Minister Nikol Pashinyan wrote on Facebook that the “win after defeat… is dedicated to our brothers” killed in last year’s war with Azerbaijan for the control of the disputed Nagorno-Karabakh region.

The war, which erupted in September and ended six weeks later claiming the lives of some 6,000 people, saw Armenia forced to cede swathes of territories to Azerbaijan.

The Russian-brokered ceasefire agreement was seen in Armenia as a national humiliation, leading Pashinyan to call snap polls in June following months of mass anti-government protests.

For some Armenians, the country’s football success could provide political lessons.

“The guys gave us such strong energy, showed that when we are united, when we are one team, we always win,” said 29-year-old Yerevan resident Anush Serobyan. “Our people needed that lesson.”

If Armenia makes next year’s edition of the World Cup, it would be just the third former Soviet state to participate in the tournament, joining Russia and Ukraine.