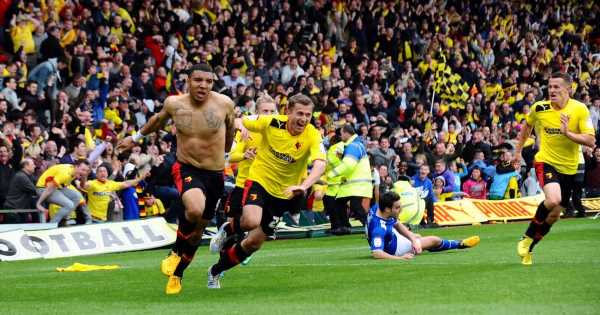 Football has changed in recent times but what will never be forgotten is the memories of fans around the world after witnessing exhilarating endings.

Great comebacks, title-winning goals and promotion parties are what every supporter of any club craves to celebrate and will rightly remember the anniversaries of these miraculous moments.

As we are waiting to see another Championship play-off battle for Premier League promotion commence, there is one game Watford fans will recall that happened eight years ago today.

Watford's crazy 2013 triumph against Leicester features in our list of unbelievable finishes as well as Champions League glory and a famous Premier League victory.

Watford trailed the first leg of their Championship play-off semi-final against Leicester 1-0 but the return leg has been written into Vicarage Road folklore.

Matej Vydra scored twice for the Hornets but David Nugent's header for Leicester kept it level at 2-2 on aggregate.

Leicester thought they had the game won as Anthony Knockaert stepped up for an injury-time penalty, but goalkeeper Manuel Almunia stunningly denied him twice on the rebound.

With no time to waste, Watford launched a counter-attack and Jonathan Hogg headed back a cross for Troy Deeney to smash home a sensational winner.

The 2011-12 Premier League title was decided by goal difference for the first time in history between Manchester City and United.

Anything less than a win would see United as champions after City closed a six-point gap and a 1-0 win at Sunderland was going United's way until Edin Dzeko made it 2-2 against QPR.

Sergio Aguero then ran through and rifled in a 94th minute winner for City to clinch their first Premier League title and thanks to Sky commentator Martin Tyler, the "Agueroooo" moment was born.

A treble was on the line for both Manchester United and Bayern Munich as they travelled to Barcelona for the Champions League final.

Mario Basler's free-kick secured "first blood" for the Germans and it was seemingly over until Teddy Sheringham and Ole Gunnar Solskjaer came off the bench to flip the script.

Sheringham turned in Ryan Gigg's low strike to keep United's hopes alive and Solskjaer stamped their name on the trophy.

"You have to feel this is their year" said ITV commentator Clive Tyldesley and he was right as David Beckham's corner was flicked on by Sheringham and punched in by Solskjaer for an emphatic win.

Liverpool had waited 21 years for another Champions League trophy and it seemed like the wait would continue when AC Milan went 3-0 up at half-time.

Gerrard's looping second-half header was followed by a Vladimir Smicer drive and Xabi Alonso cleaned up his own penalty miss to complete a remarkable turnaround.

Over to Polish goalkeeper Jerzey Dudek as he mimicked Liverpool legend Bruce Grobbelaar's wobbly legs before he saved two penalties in a shoot-out to hand Liverpool their fifth European crown.

Barcelona looked down and out when they trailed PSG 4-0 after their Champions League last-16 first leg in 2017.

They did not give up the fight easily at the Nou Camp when Luis Suarez scored first and a Lionel Messi penalty after Layvin Kurzawa's own goal trimmed PSG's lead to 4-3.

Edinson Cavani gave the visitors breathing space but Neymar added two more with a free-kick and penalty to level the aggregate scores at 5-5 in added time.

With the final whistle looming, Sergi Roberto then made Barcelona history by helping the Catalans become the first club to overturn a four-goal deficit in Europe.