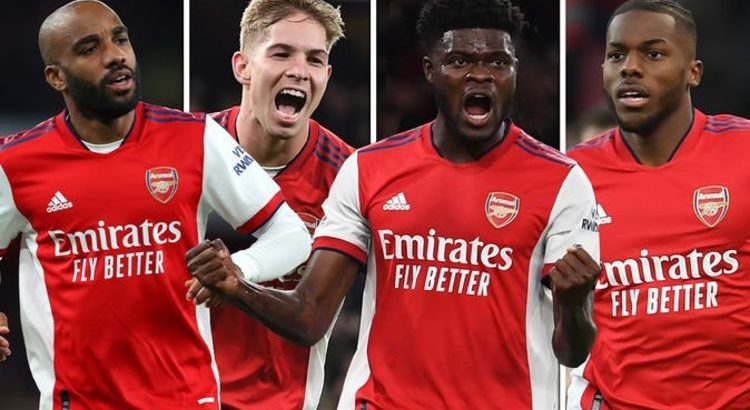 Arsenal boss Mikel Arteta has three new difference-makers to call on after a dazzling trio shone in a 3-1 victory over Aston Villa. Goals from Thomas Partey, Pierre-Emerick Aubameyang and Emile Smit-Rowe settled it on the night, but there were three in particular who delighted the Emirates crowd to fire their side to a convincing triumph:

The Frenchman was on fire when he came off the bench last time out against Crystal Palace, earning him a start this time out.

He played in behind Aubameyang, and the trademark link-up with his longstanding strike partner asked questions of Villa all evening.

Lacazette’s impressive performance proved two separate points to Arteta due to his current circumstances at the club.

Firstly, that he deserves to play from the start every week, and also that the Spaniard and transfer chief Edu should perhaps try harder to tie him down to a new contract.

Kieran Tierney’s shoes are big ones to fill as the Scottish speedster has quickly worked his way up to fan-favourite status in north London.

The 21-year-old Tavares deputised superbly, however, showing a similar level of attacking intent with the added ingredient of Portuguese flair.

So far this campaign, the youngster has found opportunities from the start difficult to come by, but he certainly proved that Arteta need not think twice about throwing him into the action if Tierney is not fully fit.

The Ghanaian has stamped his authority on Arsenal’s midfield this campaign after missing the first handful of games through injury.

He has the physicality to make himself a handful in the middle of the park, but also has solid technical ability on the ball and a natural instinct to look for a forward pass.

That combination of attributes makes him extremely tough to deal with, which came through in abundance against Villa, not to mention his headed goal which opened the scoring.

An extended run in the side via an injury-free period could allow the 28-year-old to show exactly why the Gunners forked out £45million to lure him in from Atletico Madrid on a more consistent basis.

One goal and one assist can hardly be considered a bad night’s work.

Indeed, his whipped corner was placed perfectly on Partey’s head, and he sprinted confidently beyond the Villa backline to notch Arsenal’s third of the night.

It has been a breakout season so far for the 21-year-old dubbed ‘the Croydon De Bruyne’ by Gunners fans.

Beaming with confidence in the knowledge that he is becoming increasingly important to Arteta’s plans, the Spaniard will surely keep him amongst the action as much as possible going forward.