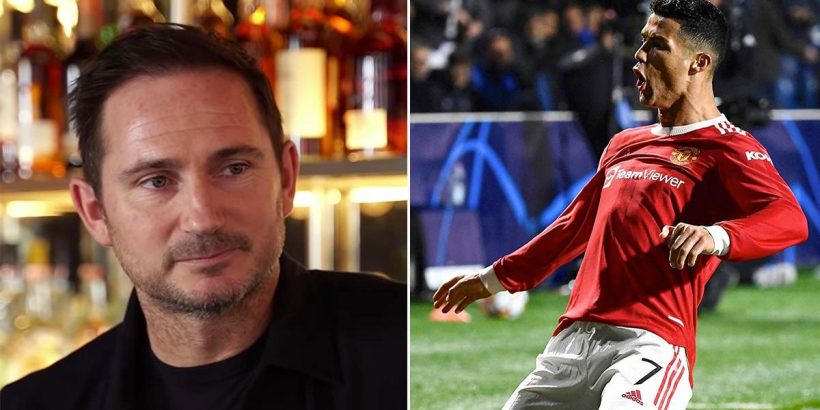 Chelsea icon Frank Lampard has changed his stance in the Lionel Messi vs Cristiano Ronaldo debate because of the Manchester United forward's big game performances.

The former England midfielder has long been on the side of the Argentine in the battle between the two best players on the planet, but has altered his view after watching an MNF debate.

Speaking to Gary Neville on The Overlap, the former Blues boss shocked the host by picking the Portugal skipper, before explaining his new point of view.

Lampard believes that Ronaldo has the edge because of his semi-final and final performances, having proved his game-winning ability once again on his return to England.

To which Lampard responds: "You know what, I've always been a Messi man… and then I watched your debate with Carra (Jamie Carragher) recently.

"I actually think for what Ronaldo's output and actual numbers and goals in big finals, and semi-finals like we've seen. I think I maybe give him the edge now.

Is Frank Lampard right? Tell us in the comments section

With Neville adding: "Absolutely, you wait till the comments come through on that one."

Lampard had said back in 2020: "I'm gonna go Messi on this on pure, natural talent but what Ronaldo has done has been absolutely incredible."

Before adding of his toughest opponents: "The two that I name when I say against is Xavi and (Andres) Iniesta at Barcelona.

"They were great players, they were kind of not the biggest and quite slight. It just shows it doesn't matter, because sometimes people think you have to be huge to be a footballer player. You don't."

Both Ronaldo and Messi have dismissed the debate in recent seasons, both noting that the success of their fellow superstar has forced them to up their own levels.

Messi said earlier this week of their time competing for La Liga: "We not only competed on an individual level but also on a team level for the same aims.

"It was a very beautiful stage for us and for people because they enjoyed it very much. It's a beautiful memory that will remain in football history."

With Ronaldo saying that Messi has been the greatest opponent he has ever faced back in 2020.