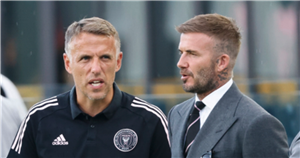 A furious Phil Neville has demanded an investigation after his side Inter Miami succumbed to their fifth straight loss.

Patryk Klimala's shot in the 26th minute put the home side 1-0 up as the under-pressure manager and his team attempted to get a goal back.

They failed to do so but at one point, former Chelsea and Juventus forward Gonzalo Higuain, 33, seemed to have put Miami level on the hour mark.

However, it was called offside, with the video official confirming it was the correct call.

Miami could not get their way back and ultimately fell to their third successive 1-0 defeat, with recent losses to Atlanta United and Portland ending 1-0 as well., and their fifth loss overall.

After the final whistle, Neville blew a fuse, calling for a "massive investigation about some of the decisions that get given against Inter Miami".

He raged: "We got cheated in Portland and we’ve been cheated again.

"I don’t want to sound like a broken record, but something is fundamentally wrong with the way referees treat Inter Miami.

"We’re playing in one of the best leagues in the world, and I’m having a great experience, but I’ve got a dressing room that’s asking real, real questions about the integrity of this league in terms of the decisions we keep getting."

Should Phil Neville be sacked from his role as boss of Inter Miami? Let us know your thoughts in the comments section below

Neville's team were denied a goal at Portland for a foul last weekend – with the former Premier League player now slamming the league.

He fumed: "We’ve had our integrity questioned this year.

"We got stones thrown at us and had to take a lot of **** and when you do wrong you accept it.

"I hope I don’t come across as a bad loser. Congratulations to New York Red Bulls.

"But I’m sick and tired of receiving emails on Mondays saying: ‘Sorry, the calls could have gone the other way.’"

Miami are 11th in the MLS Eastern Conference and have just six games remaining.