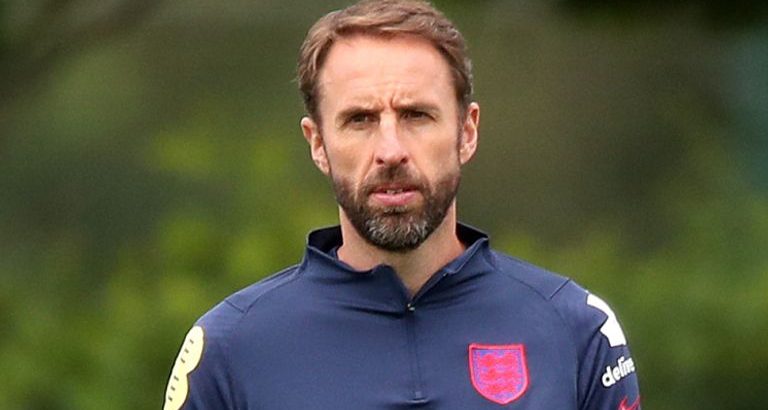 Gareth Southgate is considering switching back to a defensive four when England play their Euro 2020 quarter-final against Ukraine in Rome on Saturday.

A number of selection issues for the match are still to be decided, including the composition of the defence.

Southgate used three centre-backs for the first time since November when England beat Germany 2-0 in the last 16 at Wembley on Tuesday.

That shape was a deliberate tactic to nullify Josh Kimmich and Robin Gosens, Germany’s dangerous wing-backs.

Ukraine offer a different threat, and so Southgate might well switch again to a flat back four. England have conceded just one goal in their last eight internationals when using that system.

That would allow for an extra creative player in midfield for a game in which England are expected to dominate possession, with Mason Mount pushing hard for a recall now that he is back in full training with the squad after his 10-day isolation period.

Speaking to the FA’s England Podcast, Southgate has said of changing the plan for Germany: “We had to nullify some of their strengths. We weren’t perfect but we were very, very good.

“Once we started to get that aggressive pressure on and use the ball well, then we were a threat.”

Another key consideration for Southgate will be whether to risk those players currently on a yellow card in the tournament.

UEFA rules dictate that single cautions are only rescinded after the quarter-final stage and so Harry Maguire, Declan Rice, Kalvin Phillips and Phil Foden would miss the semi-finals through suspension should they be booked against Ukraine and England progress.

It is far from ideal that both England’s first-choice holding midfield players – Rice and Phillips – have a booking to their name.

And it makes it much more likely that Jordan Henderson may start his first game in the tournament on Saturday, as Southgate looks to protect one or other of Rice and Phillips.

Henderson came on at half-time against Czech Republic in the final group game, and in the 88th minute against Germany, but he is not yet fully match fit after missing 14 weeks of football following groin surgery in February.

Early indications are that England will stick with Maguire at the centre of defence, even though a further booking would mean he would miss a possible semi-final clash with Denmark or Czech Republic.

Maguire has been outstanding since returning to the starting 11, especially considering he missed almost seven weeks of football coming into the tournament because of an ankle ligament injury.

The England manager has also made it clear that he won’t be picking his team to please or excite the supporters, despite the fact that Ukraine are 24th in the world rankings and are in the quarter-finals of a major tournament for only the second time in their history.

Southgate will stick with a tactical, pragmatic approach, and he’s expected to continue with two holding midfield players at the Stadio Olimpico.

“In big matches, statistics tell you that defences are often critical,” he explained.

“You saw that in the Champions League final, you’ve seen that in tournaments of the past.

“We are looking really deeply at tactical things and I know that will sometimes frustrate supporters, when for example the team are not playing forward.

“We are trying to be that team that has patience to retain the ball. I played for England for years where we kept giving the ball away, and we had to chase in the heat. It was a big problem.

“And I think our players showed great resilience [at Wembley on Tuesday] to be mature enough to block out those groans when you don’t go forward, and be brave enough to pick those moments.

“I think there are times when we can play forward a bit earlier, but also retaining the ball at other times in the game and making the opposition run, and giving yourself a breather defensively is really important.”