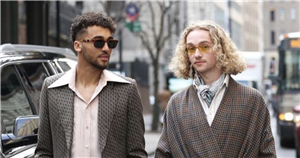 The Toffees’ star man was on target for his country again in the 5-0 win over San Marino on Thursday, hitting the net twice.

It means that the forward, who has 19 goals for his club, has now recorded four goals in six games.

While Southgate has admired Calvert-Lewin’s scoring touch being on point, the 50-year-old is not so impressed with the star’s fashion choices.

“He is really engaging and fun to be around.

“I am aware his dress sense can be dodgy but that’s not an issue here, we’re in tracksuits, so no problem with him and [Everton teammate and England Under-21 player] Tom Davies with us.”

Calvert-Lewin regularly shares his passion for fashion on Instagram, sporting designer suits and posing for the camera.

But one snap with team-mate Davies in New York saw the 24-year-old get trolled for his clothing choices.

Southgate, though, is more than happy with the player’s improvement for the national side.

The England manager added: “On the field, really, the difference [determining factor in Calvert-Lewin’s selection] has been his goals.

“We’ve always seen a player whose link play has been good, whose work for the team has been outstanding, who presses well.

“He has a great threat in the air, from crosses, in particular, but until the past 18 months, or so, he wasn’t quite finishing those chances.

“He’s now doing that consistently for his club and he’s hit the ground running with us. Pretty simple, really, that [consistently scoring] has been the difference.”

Calvert-Lewin is expected to be in the running for a place against Albania for their second World Cup qualifying match.

It comes as the forward has joked with fans about his choice of shin pads for the San Marino win.