Neville says Arsenal’s players look bored, and insists the first step should be ensuring the players start to love their football again; Arsenal’s 2-1 loss to Everton leaves them on 14 points from 14 games, their worst record at this stage of a campaign since 1974/75. 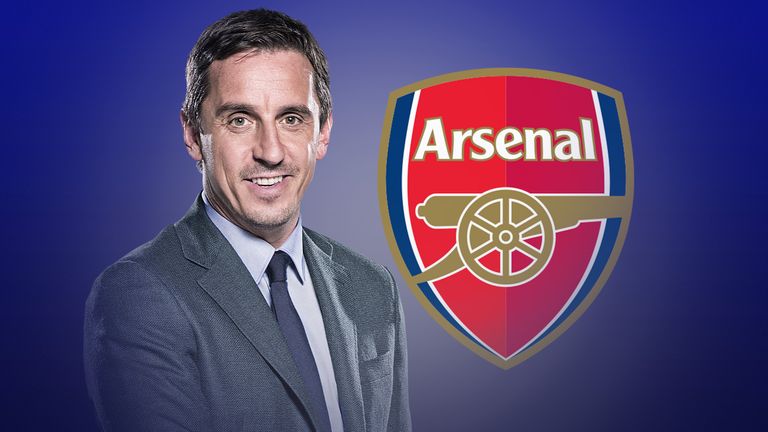 Gary Neville believes everything is going wrong at the same time at Arsenal, but says Mikel Arteta should start the fix by making them entertaining again.

Arsenal’s 2-1 defeat by Everton on Saturday leaves them on just 14 points from 14 games, their worst record at this stage of a campaign since 1974/75. Arteta celebrated a year in charge at the club on Sunday with a record of five defeats and two draws in their last seven Premier League games.

In the latest Gary Neville Podcast, the Sky Sports pundit says Arsenal’s players look bored and methodical, and insists the first step to recovery should be ensuring the players start to love their football again.

On Saturday they looked like a bunch of players struggling and toiling with how they’d been asked to play, maybe they didn’t believe in the system, or maybe they don’t believe the players next to them are good enough. Something is not right.

Although I didn’t look like I enjoyed my football, because I was always really serious on the pitch, I did love playing in this Sir Alex Ferguson team. It was a thrill, we would go forward and were committed.

Arteta has got to get those players buying into this again, the idea of going onto the pitch and having that enjoyment, love and thrill for football. Wenger’s teams always had that. This Arteta team looks more rigid, solid, but it’s a bit boring. I used to say at Old Trafford, you can win, you can lose, but you can’t be bored coming to Old Trafford.

I think Arsenal fans, and most football fans, are the same. They won’t accept being bored. To me, the Arsenal players look bored, and the football they’re producing looks like a real struggle.

Everything going wrong at the same time

I don’t think they’ll get relegated. The fact we’re even discussing that though is a real problem.

We know what has happened at Manchester United since Sir Alex Ferguson left, the challenge when someone has been there for so long, and we knew when Arsene Wenger left there would be a transition period and transformation period, that would take some time. Unai Emery didn’t work, even though I stand by what I said at the time, he’s a great coach.

There are elements of what happened at Manchester United, happening now at Arsenal. I think Mikel Arteta has demonstrated that he can coach a team and get them organised, but something isn’t right, and you can’t put your finger on it.

You end up saying: is it the coach? The recruitment? But when you get results like they are getting you end up blaming all of it, because it’s probably all true. There’s an element of it all just going wrong at the same time.

But the football was still pretty good. You still thought when you went to watch Arsenal that you’d see good football. But now, the football is really bad. They’re not good to watch. At Leeds a few weeks ago they were turgid, and watching them against Everton, it was methodical, but not Arsenal.

Because we’re used to Arsenal being that free spirit for many, many years, playing good combinations, good passes, interchanging, now it just looks very drab.

How to beat Arsenal is obvious

“We need to generate more to win football matches,” said Mikel Arteta afterwards. That much is clear but how are Arsenal planning to do that? Their 2-1 defeat to Everton at Goodison Park on Saturday was more of the same from a team languishing towards the bottom of the table.

Ten games have yielded one win and Arteta cannot argue that his team have been unfortunate. Not now. This is no false position, this is a poor Premier League team. The problems are apparent and, perhaps even more worryingly, they are familiar. Arsenal do not create chances from open play let alone score them and that sluggish approach play is beginning to appear as if it is by design.

Have Arsenal been unlucky? 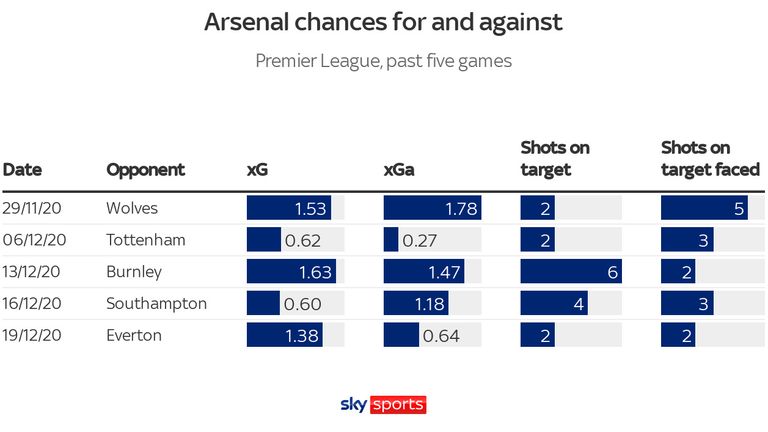 Looking at Arsenal’s last five games, Arsenal registered more shots than the opposition in just two, while analysing the expected goals in those games also shows that Arsenal were second-best against Wolves and Southampton, and only narrowly ahead of Burnley.

They also beat West Ham earlier in the season with a vastly inferior xG – 1.11 to West Ham’s 2.8 – and beat Manchester United at Old Trafford with a notable disparity – Man Utd were 1.04 to Arsenal’s 0.4.