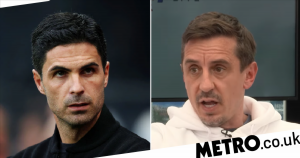 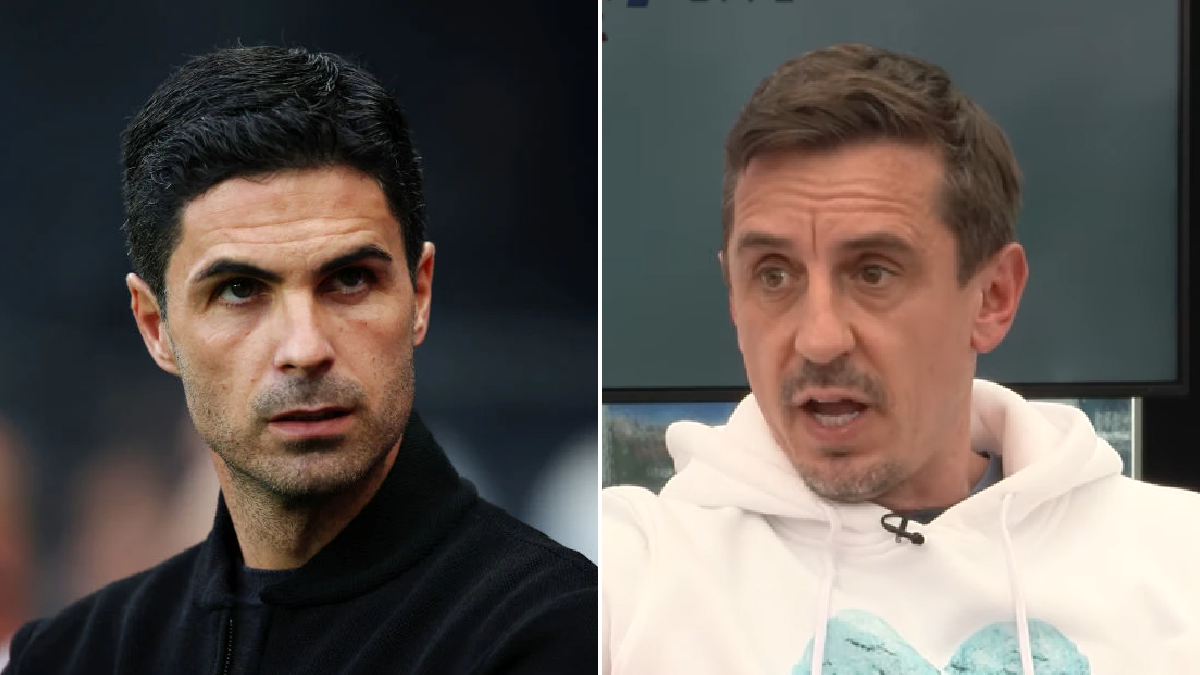 Gary Neville admits his previous comments suggesting Mikel Arteta should leave Arsenal were ‘strange’, though still has fears that the Spanish boss has taken the Gunners as far as he can.

Arsenal narrowly missed out on the Champions League after losing back-to-back matches against Tottenham and Newcastle United, finishing two points adrift of their north London rivals in fifth place.

Earlier this year, Neville suggested Arsenal had almost reached their ceiling and would not compete with the likes of Manchester City, Liverpool and Chelsea next season, claiming it would be a good time for Arteta to walk away.

The former Manchester United defender has now conceded it was a slightly odd comment to make, though still believes the past season may have been as good as it gets for the Arsenal boss.

Speaking on The Overlap Fan Debate, Neville explained: ‘The Arsenal fans have been going for me for about three or four months, battering me, because I said if Mikel Arteta got in the Champions League he should probably leave.

‘It was a strange thing for me to say, I don’t know why I said it to be honest with you!

‘I think the point I was trying to make was – I actually really like Mikel Arteta, in fact he’s brilliant friends with my brother – but I feared that if he didn’t get Champions League he would be in big trouble, and I fear that could happen.

‘And I thought if he did get Champions League it would never get better.’

Fellow pundit Jamie Carragher, similarly, fears Arsenal have wasted a huge opportunity to get back into Europe’s premier club competition – something which may come back to haunt Arteta – and has already ruled them out of the top-four race next season.

The Liverpool legend said: ‘I wanted Arsenal to get top four because I like what Mikel Arteta has done, I actually think he’s done a really good job, I really do believe that, and I love the young players that they’ve got.

‘But Mikel Arteta right now – even though he’s done a good job – is not at the level of Conte, Tuchel, Klopp and Guardiola. And I think that opportunity in that game at Newcastle, I believe that will be a game that Arsenal fans look back on and think, “That was where it went wrong for Mikel Arteta”.

‘When you say about bringing people in and it being a building process, I get that, but Arsenal will have less money now, that top four will have more money, and I just think that was a massive opportunity with having no European football, that was a big advantage this season, they now have to play Thursday-Sunday.

‘I don’t see how Arsenal get Champions League [next season]. There’s no way at the start of next season, whoever they bring in, that I would even think Arsenal would be close to the top four. I may be proven wrong.’