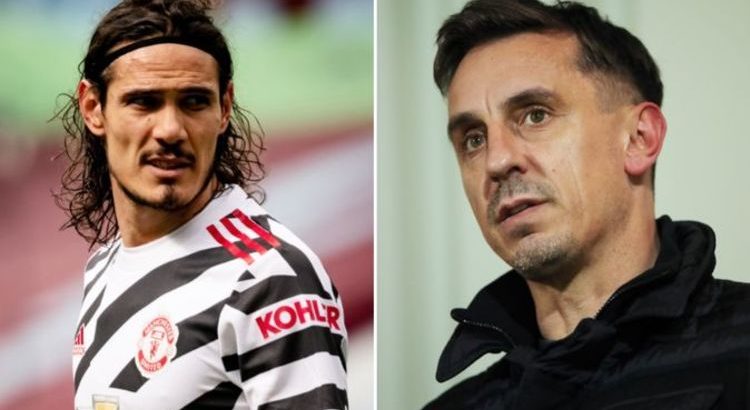 Edinson Cavani’s new one-year contract extension at Manchester United has been hailed by Old Trafford legend and Sky Sports pundit Gary Neville, who has described the Uruguayan hitman as “an absolute joy.”

Speaking ahead of Sky Sports’ live coverage of Fulham vs. Burnley on Monday Night Football, Neville waxed lyrical about Cavani’s contribution at Old Trafford since his arrival from Paris Saint-Germain.

And the former United and England man said that securing the veteran striker’s services for another year represents a real boost for Ole Gunnar Solskjaer’s side ahead of the new season.

“I guess I was one of the sceptics when it came to signing Cavani.

“I was looking at how things have gone in previous years where they signed players late on who didn’t look to be part of the plan. 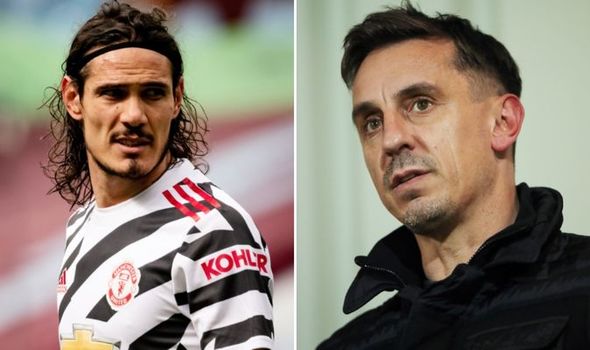 “Desperation, haven’t got their main targets. Didn’t get Sancho, chased him all summer, then you end up with Cavani at the end, someone who was touted to go to the MLS.

“I think he’s been absolutely sensational in every single way. His attitude, his commitment.

“Forget the goals – I think his impact on the other players. You think about positive influences on the likes of Rashford and Greenwood.

“Man United can press better when he’s at the front, they’ve got a better target man to hit. I think ultimately you look at the sort of strikers who have emerged over the last few years in the Premier League, it’s more fluid forwards, flexible, all over Europe.”

Neville then extolled the virtues of Cavani as an old-fashioned number nine who can lead the line and provide stability and leadership up front to help bring the best out of his young emerging teammates in the United strikeforce.

“This is a throwback. A classic centre-forward, makes brilliant runs, runs that you’d be taught 20 years ago, and I just think he’s been an absolute joy,” he enthused.

“They’re a better team with him in it. I think he’s in the best team. Always in great positions, the timing of his runs and finishing from those positions is the best in the league.

“His heading is absolutely wonderful, his work ethic, his all-around performance, his impact on others, and it’s filled a hole for Manchester United.

“Martial has been injured, Rashford is better on the left, Greenwood’s not been quite ready. Without him this season would’ve been completely different.

“I suppose it does beg the question about what Manchester United’s plans are for next season but I’m glad he’s part of it.”