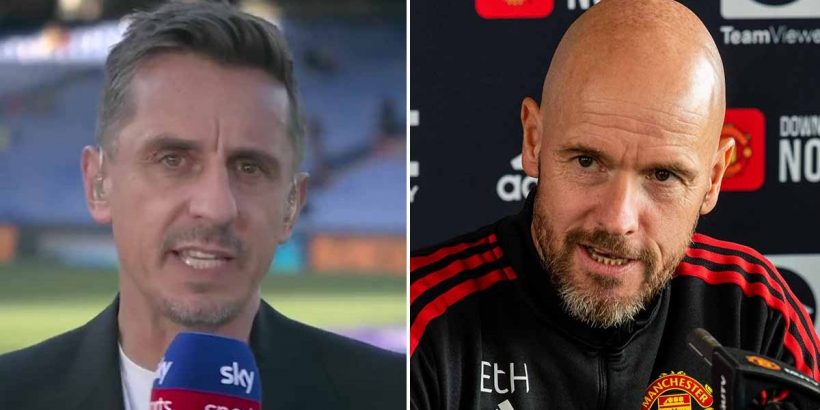 Gary Neville has said that he will not be placing any pressure on Erik ten Hag as the new Manchester United boss settles into his role.

The former United defender was on Sky Sports ahead of the opening Premier League weekend when he stressed that the Dutchman would need time to settle into his position.

READ MORE: Every Premier League club's kit rated by body language expert on the impact it will have

"Manchester United will look like they’re incredibly smart if they get De Jong in for the money they wanted or they might look embarrassed if he goes to Chelsea.

"Then there’s the Cristiano Ronaldo situation complicated by Martial, he’s not had the ideal point of view of settling in, I think a Manchester United manager is always under pressure but as a United fan, I’m not placing any real pressure on Erik ten Hag."

The former England international then said that Arsenal manager Mikel Arteta is entering the season where it's expected that he delivered something more than a Europa League spot – but Ten Hag should be warranted some breathing space first.

Do you think Ten Hag can succeed at Manchester United? Let us know in the comments section below

Neville continued: “You see Arteta tonight, he’s been there three seasons, spent millions of pounds, this is the season he has to deliver this doesn’t feel like the moment Ten Hag is faced with since coming in and the fact he’s quite got the players he wants.

"I know he says he’s happy with the squad but he can’t be because he does want other players we know that so he can’t quite be happy. I think he’s had a really good impact on the players and what he’ll do is maximise their potential and talent and that’s all he can do at the moment.”

Neville was part of the Sky Sports team who enjoyed a night out ahead of the new campaign. All the likely faces were at the social event, including Jamie Carragher, Roy Keane, Martin Tyler, Alan Smith, and David Jones.

His former team-mate Kean went viral for refusing to give a smile for the camera when a group photo was taken, his stern face becoming the stuff of legend down the years.