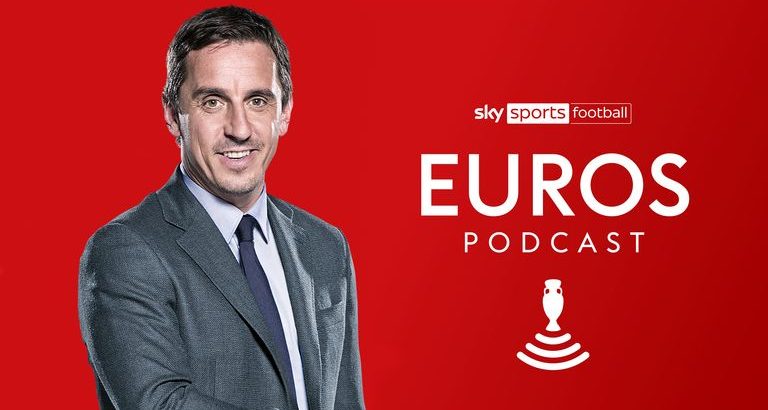 Keep up to date with everything happening at Euro 2020 with Sky Sports Football Euros podcasts throughout the tournament and subscribe via Spotify, Apple Podcasts, Spreaker or your favourite other podcast provider

Gary Neville tells the Sky Sports Football Euros podcast how he thinks England will fare at Euro 2020, how transfer talk will affect Harry Kane and his tip for the tournament.

Ahead of the big kick-off on Friday when Turkey play Italy in Rome, and England’s opener against Croatia two days later at Wembley, Neville spoke to the debut edition of the podcast to give his lowdown on England’s chances, his memories of a European Championships on home soil and much more.

Neville was the first guest on the Sky Sports Football Euros podcast, with many more to follow throughout the tournament. Stay across skysports.com to follow them all, plus live blogs and reports from every game across Euro 2020 from June 11-July 11.

Can England lift the trophy?

I’m going to say yes. It would take a lot of luck, one extraordinary effort, things to go their way, but I’m going to say in a Wembley stadium full of English fans on the right day, we saw Chelsea do Man City last week, so if you think that was very unlikely to most people before the game, this could certainly happen.

I don’t think England winning would be a shock, or a surprise. After getting to a World Cup semi-final three years ago, now there is expectation on them. They’re not going there thinking ‘I hope we get to the quarter-finals’, there’s an expectation because of what they did three years ago.

The fact the players are there with the talent we have, and the question is over Harry Maguire, but I’d say the expectation should be to get to the semi-final or the final. That’s what they’re used to. They’ve lived in that World Cup in Moscow, they’ll be thinking they can do it again.

Our strengths are the talented players in the forward part of the pitch. We’ve got really good full-backs, but we really have to think about the centre-back pairing or back three though, that’s where the real conundrum is for Gareth, adapting between a five and four from game to game, and strength of opposition will also matter massively on that front.

But losing Harry Maguire, Carra and I had a heated debate about it on MNF six to eight weeks ago where I said I felt he was the most important player in the squad.

Taking into consideration that I think Harry Kane’s the best player, if Kane got injured there were options where England would suffer, but not as much as by losing Maguire at centre-back. That means Southgate has brought Ben White in and will probably have to go to a back three.

I don’t think there’s a natural partner who’s really strong enough in the big games in this tournament to partner John Stones. For me, that’s the big thing. How far is he away, when can they get him fit, how will that happen mid-tournament, which has always proven difficult in the past. Those are the real concerns I have.

I think Gareth will be pragmatic, playing against a France or a Belgium, you’re not going to dominate the ball as much and will be out of possession. You have to make sure you maintain a strong defence. That’s not to say you don’t win the game, but winning the game through set-pieces or a counter-attack, or moments in the game, is a different proposition to controlling the game.

Even if Stones and Maguire were at centre-back, I think in some games they would have to be more defensive and pro-active, but that’s always been the same; you have to adapt. It’s horses for courses, but at the moment the two central midfield players, Rice and Phillips, have got big jobs to do. I don’t think we’ll be seeing creative midfielders in the centre of midfield for the duration of the tournament, I think they’ll be there to protect the back two or three to have the platform to build from.

Will transfer talk be a distraction for Kane?

I think if it was a player who sought the attention, or was emotional about it, it’d cause a big problem. He’s not going to break stride, Southgate isn’t going to worry about it for one moment. Kane is a complete professional, totally focussed.

He will not consider his future during this tournament. He knows how big it is for himself and his country, and he loves his country. It would be different if he was a player who was more emotional, more heavily scrutinised in the media, whereas he’s so secure and stable in the way he goes about things.

Alan Shearer had tournaments with speculation hanging over him and I put them in the same category – ice cold, don’t let things affect them. Southgate would never in a million years be concerned about distraction for him. He’ll be absolutely determined to win this tournament for his country.

‘Modric’s a gamechanger; the one you can’t stop’

Producing talented players is one thing, but having a real spirit for the nation, for the country, I was part of Euro 1996 where Croatia’s fans burst onto the scene, I think it was the first time we’d seen them in a tournament and it was an incredible thing.

They’ve always had talented players, obviously beating England in a semi-final three years ago. There was disappointment but they were just better. As the game grew, as it travelled towards the end, their midfield got on top, started to switch the play and wear us down.

Forget the 5m population, they’re a really good group of players, who desperately want to do well for their country.

With Modric, you’ve got a player who’s seen every game, every situation. He knows he’s composed at the right moment, and that’s a problem for England. If that moment in the game comes, a draw with 10 minutes to go, he’s in and around the final third, he’s the one who will thread that pass, who will put that ball into the box. He will win that free-kick and take it. These players are game-changers, the ones you can’t stop.

I think it was in 1998 we played an ageing Georgi Hagi for Romania, and we ended up with a really disappointing result. When you have these great, great players, even just one in a team, they can make a massive difference to the group around them. They just thrive off them.

He’s adored, not only in his own country but around Europe. He’s a big danger to England, and one that needs snuffing out.

The first game against Switzerland we drew, it was a really disappointing start and we had a very bad press for a week leading up to the Scotland game. We suffered in that game badly too, Scotland missed a penalty, they played really well in that game. People remember the Gazza celebration, but his goal lit up the tournament for us. It lit up the whole of Europe at that time, I would imagine, it was such a special goal. The crowd, the atmosphere, was sensational.

We’ve got players who can do that in Foden, Grealish, Rashford, Sterling, Kane, players who can light up this tournament, deliver in that one moment and light up a nation. We need that badly this summer. People are questioning at the moment how Rashford, Sterling, Foden, Mount and Grealish fit into this team, Sancho too, but the good thing is we’ve got these players in abundance, and Harry Kane up there to be the central focus of the attack.

It’s a massive opportunity for us, if we can keep stable at the back, get the ball into good areas, we’ve got a big chance. I wouldn’t put these forward players in comparison to Ronaldo and Messi, nowhere near, they’re young and haven’t proven it yet, but they can produce moments which will take them into that stratosphere in the next five or 10 years if they can deliver on this stage consistently.

Neville’s tip for the tournament

I can’t look past France, really. I just can’t. The experience, winning mentality, personalities they’ve got, pace and goals, clever, intelligent, you think they could play in any type of game, that French team.

They could play against a team that’s more direct, a team that’s sat off them, a team that tries to control possession. It’s an adaptable team. I don’t think they would concern themselves with whoever they’re playing.

Sky Sports Football Euros Podcast: Gary Neville on England’s chances, why France are favourites, and how Euro 2020 can lift the nation

Sky Sports pundit Gary Neville (5:07) joins Peter Smith on the Sky Sports Football Euros Podcast to build up to the big Euro 2020 kick-off. Neville has his say on England’s strengths and weaknesses, what they’ll need to do to beat favourites France to the title, and how this talented young group of England players can raise the spirits of the entire nation.

During the podcast, we also get the lowdown on how Scotland and Wales (22.54) are shaping up from the Sky Sports News reporters following their campaigns, Charles Paterson and Geraint Hughes. Plus Valentina Fass from Sky Italy and Uli Kohler from Sky Germany (56.39) give us the view from the continent on how their own nations are looking.

Sky Sports deputy football editor Kate Burlaga and football writer Ben Grounds will also be sharing their top tips for the tournament, including who will be lifting the trophy on July 11 – and which players will light up the tournament (1.09:35).