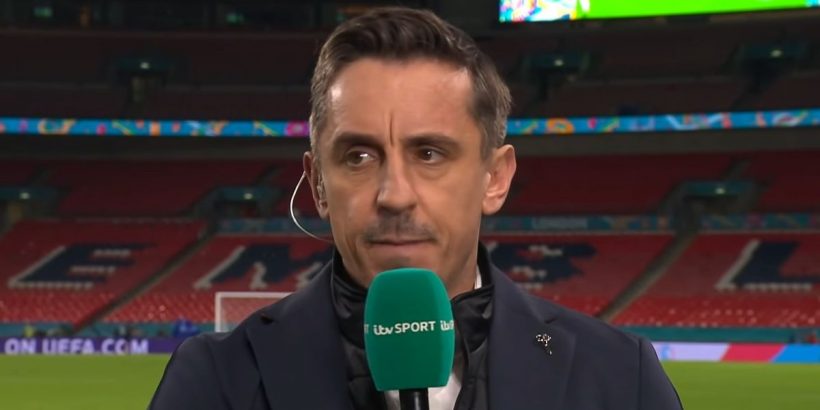 Manchester United legend, Gary Neville, has stated that he thinks Spanish striker Alvaro Morata 'needs a hug' when speaking on ITV ahead of Spain and Slovakia's Euro 2020 clash on Wednesday evening.

Morata, who was on Chelsea's books before he was sold last summer, has struggled in front of a goal at Euro 2020 – as he did in London.

His form continued against Slovakia, when Newcastle's Martin Dubravka pushed his penalty aside, before he committed an incredible howler, and he was later substituted without a goal to his name.

And Neville relayed his sympathies to Morata when speaking ahead of the fixture.

"He's got that vulnerable look about him, almost like he needs a cuddle," Neville told ITV during the build-up to the game.

"He looks like when he misses a chance he's fearing what the media and what the press and what his team-mates might say. Looks like he's had some criticism playing for the national team.

"He's not a Diego Costa, a Lewandowski, a Kane – these sort of characters who are steely eyed. He's just not that. He's very different.

"I also think about the way Spain play, he does need crosses into the box, but they don't generally play like that, Spain. They're not a Germany.

Do you think Morata should have performed better? Let us know in the comments section

Ashley Cole also spoke on Morata: "He reminds me of Fernando Torres when he came to Chelsea. You know at Liverpool he was so effective, scoring all types of goals. Morata seems similar.

"We keep going back to it, Spain don't play the same. He thrives on balls in the box and it's about how he can adapt to this Spain team."

Spain put Slovakia to the sword, scoring a hatful of goals, Morata name, however, was a glaring absentee from the scoresheet.