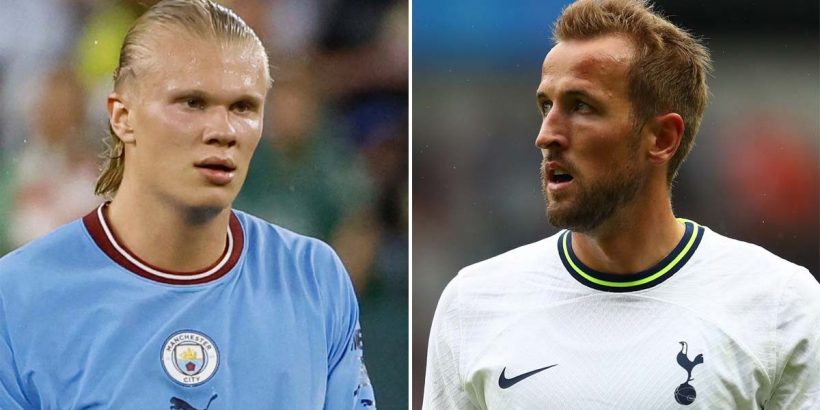 Perpetual marksman Kane, 29, has consistently notched 17 plus goals in the top-flight since his breakthrough 2014/15 campaign, winning the golden boot on three separate occasions. The Tottenham Hotspur ace is one of the most feared forwards in the Premier League but the arrival of £51million man Haaland has threatened his status as the undisputed king in England.

The Danish international, 22, registered 86 goals in 89 matches for Borussia Dortmund before linking up with Pep Guardiola's free-scoring side and is anticipated to pick up where he left off in the Bundesliga.

But former Man United captain Neville believes Kane will outscore Haaland in the 2022/23 campaign. "Kane," said Neville on The Overlap when asked a quickfire question on which forward will bag more goals. "I'm just more sure of it.

"I'm more sure that Harry will hit a number. I don't know what Haaland is going to do. It could be 40 but it could be 18, 20 – I don't know." Whilst Sky Sports colleague Jamie Carragher opted for Haaland.

HAVE YOUR SAY? Who will score the most next season, Harry Kane or Erling Haaland? Let us know in the comments section.

Kane and Haaland are expected to be in action during the Premier League's opening weekend and both have favourable fixtures. Antonio Conte's revamped Tottenham face Southampton at home in their season curtain-raiser, a fixture in which Kane has bagged 11 goals in the last 14 top-flight meetings.

Haaland and Manchester City start the new season away at West Ham United. The Cityzens have not failed to score against the Hammers in the Premier League since a 0-0 draw in 2012.

Can you manage to fit both in your fantasy team?