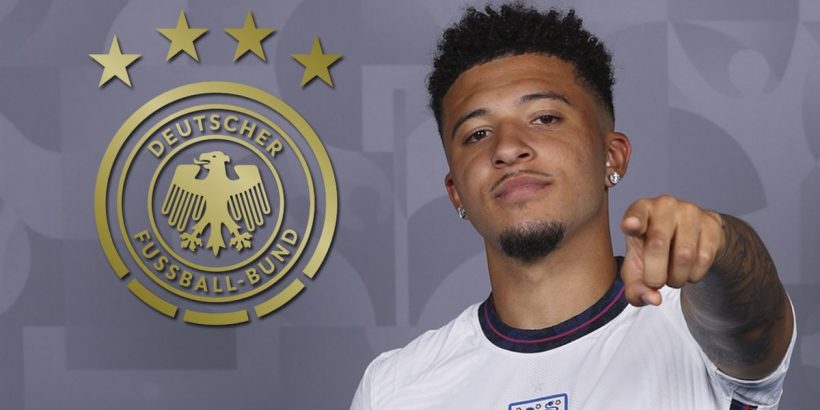 England have been warned that Germany want to give Jadon Sancho a “passport” as Gareth Southgate bafflingly continues to snub the winger.

But while his talent has been obvious for some time for people watching him in Germany, it appears that Southgate is less convinced by the 21-year-old.

He has not named the winger in the starting line-up for any of England’s games at Euro 2020 so far, handing Sancho just six minutes as a substitute against the Czech Republic.

Sancho’s continued absence has confused many, particularly in Germany where he is well thought of, despite his impending move to Manchester United.

The Three Lions will host Germany in the last 16 of Euro 2020 on Tuesday, and Die Mannschaft legend Lothar Matthaus has jokingly warned England that Sancho could switch his allegiance.

“He was one of the best players in the Bundesliga for the last two years,” Matthaus, speaking as research from Official Accommodation and Attractions Booking Partner of UEFA EURO 2020™, Booking.com found that 61% of English supporters would rather see Germany, their main rivals, win the upcoming tournament, than skip their next holiday, said.

Should Jadon Sancho start England's quarter-final against Germany? Comment below.

“If he is not good enough for England, we would like to give him a German passport! It has surprised many in Germany.”

Matthaus was a member of the Germany team which beat England on penalties at the 1990 World Cup.

And he warned the Three Lions that Tuesday’s game will go the same way if they don’t win the game before the end of extra-time.

“England have a chance to win – but not with penalty kicks. If it goes to penalties, Germany will win, so England have to do it inside 120 minutes,” he said.

“We are always very good with penalties. It’s always a little bit of a joke between the Germans and the English but if it goes to a shootout then we are the favourites.

“It’s a lot of pressure for the English players because they read every day in the newspapers all the stories about penalties.”

Booking.com proves we are more friends than rivals during UEFA EURO 2020™ #RivalsReUnited