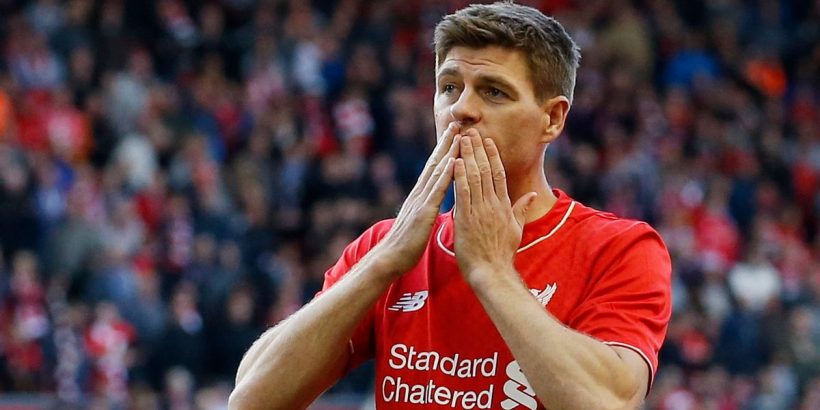 The result was a dismal one, losing 3-1 to Crystal Palace, but it was an afternoon where the final score came some way behind the outporuing of emotion to Steven Gerrard.

After 710 appearances, 186 goals and seven major honours, the talismanic midfielder pulled the curtain down on his illustrious Anfield career.

Supporters gathered in the stadium hours before kick-off to pay tribute to one of the greatest to ever pull on the iconic red jersey.

Gerrard was given a guard of honour and a prolonged ovation as he turned out in front of the Kop one final time.

"The first time you play for Liverpool Football Club is a dream come true. Everything else after that was a bonus for but the first time playing for Liverpool is an absolute dream,” he said on the pitch after the full-time whistle.

His final game would come one week later, a similarly chastening afternoon as his goal was the consolation in a 6-1 embarrassment at the hands of Stoke.

In the six years since that emotional Anfield farewell, Gerrard has managed to cram plenty in, becoming a legend at a second British giant in the process.

Less than two months after losing to Palace in his final Liverpool game, Gerrard turned out for LA Galaxy for the first time.

Following in the rich tradition of overseas imports like David Beckham and Robbie Keane, hopes were high that he would have a similar impact

His ambition before moving to America was to bring another MLS Cup to the Galaxy.

But despite playing in a team also including Ashley Cole and Giovani sos Santos, he fell short.

In truth, there was always a scepticism about Gerrard’s tenure in California, with some supporters suggesting his move was more about lifestyle than soccer.

Following a second successive failure in the play-offs, Gerrard announced he would be leaving MLS after finding the distance between he and his family more difficult than expected.

Even his final message irked some Galaxy supporters, when he posted: “Special place incredible view I will miss you LA”, with no mention to the team itself.

Shortly after his return to England, Gerrard confirmed his playing days were over, with eyes on a move into management.

Shortly before hanging up his boots, aged 36, he was interviewed for the vacant manager job, turning it down and claiming he wasn’t yet ready.

He would instead take his first step on the coaching ladder back at Melwood, when he was appointed as a youth coach at the start of 2017.

And he quickly made the type of impression that so many anticipated – after just four months in that role, after impressing Jurgen Klopp, he was given the job as Under-18 coach.

Gerrard continued to earn his coaching chops as the Under-19s boss, taking a side that included Herbie Kane and Curtis Jones to the quarter finals of the UEFA Youth League.

In May 2018, Gerrard was given the small task of returning Rangers to their former glory and ending Celtic’s stranglehold over Scottish football.

And in his first season he got the Gers as close as they had been to their Old Firm rivals, since they spiralled down the pyramid in 2011.

2019/20 showed signs they could compete with the Bhoys, but would ultimately fall short as the coronavirus pandemic ended the season prematurely and handed Celtic their ninth straight Premiership title.

Then came 2020/21. With the looming spectre of ten-in-a-row, Gerrard’s long-term plan came to fruition as his side enjoyed one of the greatest league seasons in the recent history of the Scottish top-flight.

Saturday's final day 4-0 win over Aberdeen ensured they eclipsed 100 points, went the entire season unbeaten – and perhaps most importantly returned Rangers back to the precipice of Scottish football.

If there is a set of supporters likely to rival Liverpool’s admiration for Gerrard, it is those fans who have watched their decade-long voyage back to the top of the game ended by his skills in the dugout.

Sir Alex Ferguson and Steven Gerrard rarely saw eye-to-eye at the height of the Liverpool and Manchester United rivalry.

The legendary United boss once made headlines when he flippantly described him as “not a top, top player”.

But while he had questions about his performances on the field, the boyhood Rangers fans has no such doubts about his managerial credentials.

"He's done magnificent. He really has, both on and off the field,” Ferguson admitted.

"A press interview can lose you your job in management. But Steven's press conferences are fantastic. He's cool, he's composed, he gives the right answers. He's really top because it's an art."

If his last six years are anything to go by, by 2027, Gerrard could have reached the very pinnacle of this discipline as well.

Rumours of a return to Anfield are unlikely to cease, particularly if Jurgen Klopp was decide to leave his post.

Until then however, it looks certain that he will continue to build his legacy at Rangers and continue to improve his reputation as one of the best young coaches in European football.