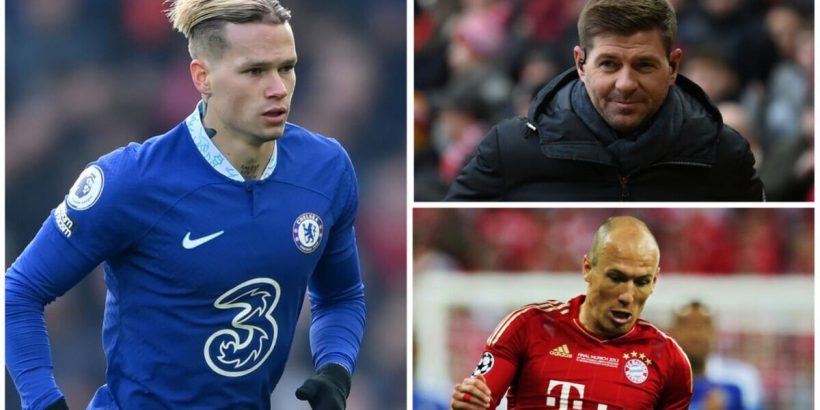 Mykhaylo Mudryk was the hot topic of discussion as Chelsea arrived at Anfield with their new £88million signing to face Liverpool and, by the end of the 90 minutes, his name was on their lips again. There was little doubt in the minds of those watching that this player had star potential after a memorable debut cameo, with Liverpool hero Steven Gerrard hailing the winger’s performance as reminiscent of Netherlands legend Arjen Robben.

The 22-year-old was given 35 minutes on his debut for the west London side to impress, with Graham Potter gambling on the exciting winger to come up with the goods with the game deadlocked at 0-0. And after a subdued opening, he soon found his feet with a brilliant slaloming run in between two defenders before smashing into the side netting to sound a warning.

Later in the game, Mudryk showed his blistering pace to leave James Milner in his wake, which was perhaps an unfair test given the versatile midfielder’s 37 years. But he soon blew away a much quicker Ibrahima Konate in similar fashion to display his extraordinary athleticism, as the youngster began to become increasingly influential. Soon, his colleagues realised it was time to give him the ball as often as possible and, in different circumstances, Mudryk might have had a goal to cap his first appearance.

Gerrard and his BT Sport colleague Rio Ferdinand were left salivating about Mudryk’s performance, insisting Arsenal fans would be cursing their club’s failure to sign Mudryk after Chelsea beat them to the punch. But Gerrard’s comparison to Robben would have raised some eyebrows and, in some ways, it made perfect sense after watching him glide past defenders.

“He looks the real deal, some of his clips today were outstanding,” he told BT Sport. “He reminded me a bit of Arjen Robben today, the first touch he got wrong but from here his footwork and how quick he is, how he manipulates the ball I would be very excited if I was Chelsea.”

Mudryk would no doubt appreciate being mentioned in the same breath as one of the most talented wingers of the 21st Century, especially by one of the best midfielders of his generation in Gerrard. But such glowing praise can often trigger some issues that Mudryk may want to avoid if he is to have a successful career at Stamford Bridge.

There are similarities in the way that the two left-footed forwards made their way to the Premier League at a young age and from a league which is a large step down in quality from the Premier League. Mudryk has never stepped outside of Ukrainian football before now, although he caught the eye with three goals in six Champions League outings, which suggests he can handle playing at the top level.

In his first season at Chelsea after signing from PSV Eindhoven for £7m in 2004, Robben lit up Stamford Bridge by scoring seven goals and assisting nine in just 18 Premier League games.

But over the course of the next two seasons, he would struggle to build on his encouraging start, finding the net only nine more times with seven assists in his next 49 games under Jose Mourinho.

Chelsea will be hoping Mudryk will only improve after this stellar display from the bench. Despite flourishing with fancy footwork and some attractive link-up play, there is an argument that Mudryk should have found the back of the net with at least one of his chances.

Some would put that down to rustiness as he had not played a competitive match since late November, and Chelsea will be hoping he takes his next chance given Graham Potter’s side tendency to be profligate in front of goal.

But goals are certainly what made Robben one of the most lethal wingers in the world, and the same could be expected of Mudryk if he continues on his upward curve.

The pressure of Gerrard’s words could also have the adverse effect on Mudryk given the lofty heights that Robben reached in his illustrious career. He did so without the burden of being entangled with huge transfer fees, while Mudryk is the second-most expensive player in Chelsea’s history.

The difference is that Robben thrived on the pressure that was placed upon him after signing for Chelsea, then Real Madrid and finally Bayern Munich before a brief stint with his boyhood club Groningen.

At such a young age, it is impossible to judge whether Mudryk will cope with the burden, but the £88m expenditure on his shoulders suggests there is not much of an allowance for failure at Stamford Bridge. Every game, there will be scrutiny placed upon his performances and it is a part and parcel feature of playing for the Blues.

Still, there are signs for optimism that Mudryk can make a sizeable contribution to help Chelsea return to the top of English football after a poor start to the season. If he can develop into a player half as good as Dutch star Robben, Chelsea are bound to be happy with the final result – and the early signs indicate they have every right to believe he can be.