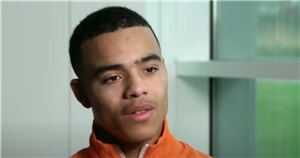 Mason Greenwood’s exciting comments on his future back up the bold predictions many are making about the Manchester United forward.

The 19-year-old has made 50 appearances in all competitions this season, eclipsing his tally for last year, though he has five goals less as things stand.

Greenwood has struggled heavily for form this year, but hit his stride at the start of last month, and has now bagged eight goals in his last 12 matches.

And despite arguably not reaching the same heights as he did last term, the England international insists that his overall game has improved, showing that the predictions made by the likes of Paul Pogba and Rio Ferdinand have for him to become United’s main striker for many years may be coming true.

"I have still got a few years to reach my full level of speed,” Greenwood told Sky Sports. “I am still growing, still filling out. I am only 19." The result is that his game is changing.

"My all-round play, my defensive work. Just being a player, basically. That is coming through now.

“My hold-up play has improved. I don't think I give the ball away as much as I used to do when I was younger and just coming into the team.

“I know the game a bit more and the pace of the Premier League a bit more. It has all come together."

United team-mate Paul Pogba was one those who has backed Greenwood to become a world class player.

"Like I have always said, Mason is a big-talented player that we had from our academy," Pogba told Sky Sports.

"He can go to the highest level, world-class, it just depends on him. He has to work hard, harder than everyone, believe in himself and want it.

"When you're talented like this, you already have talent, now it's only the work you put in to make you become the world-class player you have to become with this talent.”

Meanwhile, Red Devils legend Rio Ferdinand said last October that he believes Greenwood has what it takes to be one of the best strikers on the planet.

"He’s a great player, he can hit the ball off both feet equally well, and he’s scoring goals like he scored them in the youth team. It’s a step up in terms of quality level, but he’s doing what he’s done for years and years.

"He’s a player with absolutely huge potential and I think he’s going to go right to the top."