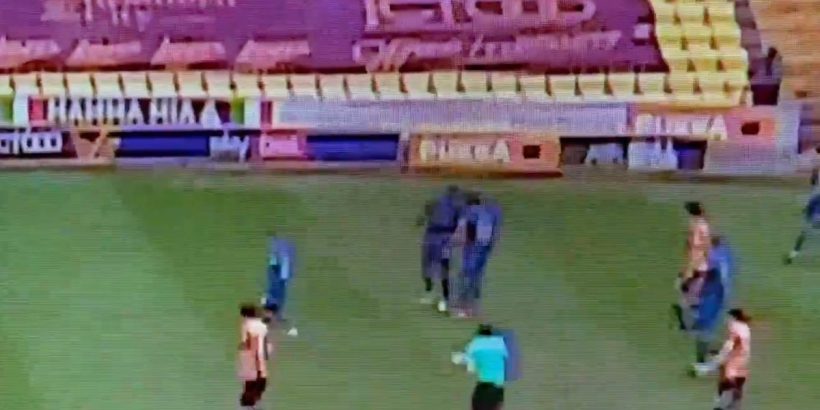 Grimsby Town player Stefan Payne was sent off at half-time for headbutting his own team-mate during Saturday's League Two fixture against Bradford City.

Payne clashed with team-mate Filipe Morais, with The Mariners 1-0 down, after the half-time whistle was blown as the players were trudging back towards the changing room.

Morais can be seen gesticulating at Payne only for the the 29-year-old to turn round and lean his head into the Portuguese winger.

With the scarcely believable scenes taking place in front of the referee, official James Bell quickly ran over to separate the debacle, before following Payne to the dressing room and producing a red card.

And their opponents could barely believe what they had seen either, tweeting: "A truly bizarre end to the first half. Stefan Payne headbutts Grimsby team-mate Filipe Morais following an argument. Referee James Bell follows Payne into the dressing room and dismisses him. Crazy."

Anthony O'Connor had scored for the home side just three minutes prior to half-time which could explain why tempers were flaring.

A recent run of draws and a win had provided some hope to Town's fans but Saturday's visible show of disharmony in the squad will do little to help their relegation fight with just eight games remaining.

“It’s something you can’t defend. The two players have let the club down, their team-mates down and the fans down," he said.

“We’ll be taking action. It will remain private but will not be swept under the carpet.

“He’s got a three-match ban but I’ve got some thinking to do about whether he appears again for us this season.”

Bradford joint boss Mark Trueman added: “I heard the two players having a little bit of a moan as soon as the whistle went.

“I turned round to walk down the tunnel and then I was told by a couple of our players about the headbutt and he was going to be sent off.

“Grimsby are fighting for their lives and emotions are running high. Unfortunately he’s not kept his emotion in check and it’s affected his team.”