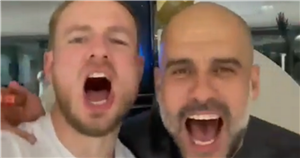 A video has emerged of Pep Guardiola smoking a cigar and belting out Oasis following Manchester City’s title win.

United’s defeat gave the Blues an unassailable lead at the top, sparking wild celebrations at the City Football Academy.

It was Guardiola who was in the mood to celebrate most, with the Spaniard caught on camera having a lovely old time.

In a video shared on social media, the 50-year-old boss can be seen puffing away on a cigar while singing Oasis hit Don’t Look Back In Anger.

City fans loved it, with one commenting: “How could you hate Pep?? One of the greatest managers of all time.”

“What a man. Hope he stays forever,” was the view of another Blues supporter.

While another jokingly said: “Give him a lifetime contract.”

Recalling the night of City’s title win, Guardiola told a press conference last week: “We trained a bit, we danced, laughed, remembered how good it was. 10-15 pizzas arrived too which was the best moment!”

When quizzed on his favourite type of pizza, Guardiola joked: “I don't know. I was not in my perfect condition to decide which one I ate! But I think all of them was so good!

“Here in England, the parties are always just alcohol not food. I don't understand why. But in that moment it was perfect. It was a nice moment all together, we celebrated really good.”

Guardiola will hope to be celebrating again later this month when Manchester City take on Chelsea in the Champions League final.

The Premier League pair will go head-to-head in Porto on Saturday 29th May with Guardiola aim to win Europe’s top prize for the first time since 2011, when he guided Barcelona to victory over Man United.

We can’t wait to see what celebration video Guardiola has in store if City can go all the way in Portugal.