Forced out of the away dressing-room due to Covid protocol, the Rangers players changed in a selection of New Douglas Park anterooms including a portakabin and a burger shack.

The preparation was unconventional but the fare served up by Steven Gerrard’s players was the kind of staple victory with which title challenges are nourished.

There was nothing flashy about Rangers’ play, nor the goals scored by Ianis Hagi and James Tavernier, but this was another fixture to chalk off as Celtic continue to play catch-up with their three games in hand. 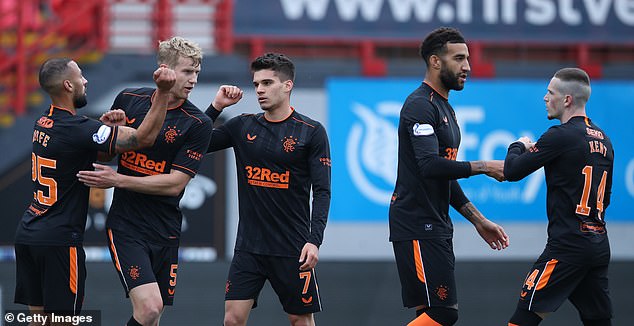 Nevertheless Gerrard was measured in his praise of the performance.

A sixth consecutive shut-out was pleasing to the manager – the failure to add to those first-half strikes less so.

He said: ‘I thought we were excellent to go one and two up but then I thought we became really wasteful.

‘Our play up to a certain point was outstanding but if you were a player in the top half of the pitch you should have got a goal or an assist.

‘I thought Hamilton were there for a stronger score line. If you look at our results this season there has been three or four times that I’m going away thinking we should have got more goals today.

‘At some point that might come back to bite us.’

There is a worthy theory out there that plastic pitches will have as much of an influence on the destination of this season’s Premiership trophy as clashes between the Glasgow two. 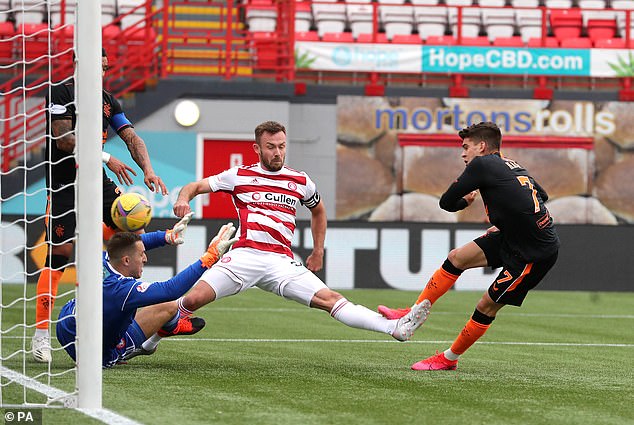 Already Rangers have dropped points at Livingston and Celtic at Kilmarnock, venues that have persistently troubled each side in recent seasons.

Yet for some reason neither team seems to struggle too badly when it comes to playing at Hamilton.

Accies boss Brian Rice is of that rare breed, a manager who prefers to attack and advance youth development even against the toughest opposition.

Here, he went with two strikers. The intention was for Ross Callachan to feed off Marios Ogkmpoe but the effect was to leave Charlie Trafford and 18-year-old Reegan Mimnaugh struggling to get a handle on Steven Davis and Ryan Jack in the middle of the pitch. 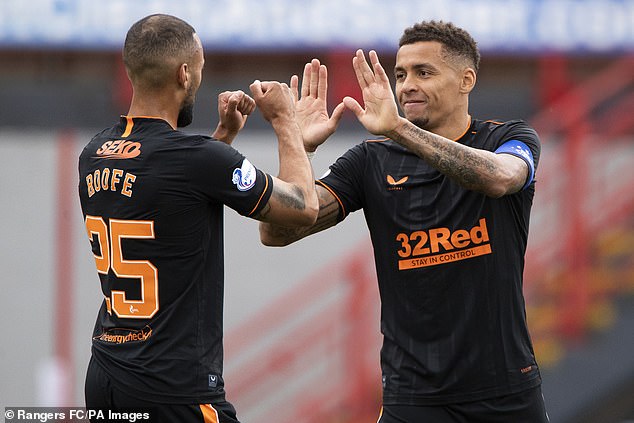 With Davis moping and Jack in industrious form, Rangers dominated the ball and didn’t have too work too hard for their goals.

Having tinkered with his own formation against Kilmarnock last weekend, Gerrard retained the new shape with one tweak to the personnel as new signing Cedric Itten dropped out with a calf injury.

His place went to Hagi and that freed up a seat on the bench for Alfredo Morelos, who had been dropped after showing a lack of focus in the wake of a failed transfer bid from Lille.

For once the Colombian managed to avoid being the story of the day.

Kemar Roofe again led the line with Hagi joining Ryan Kent and Brandon Barker in a three-pronged support and Rangers got their early goals in slightly scrappy fashion. Roofe was stretching as he jumped to meet Davis’s cross from the left but got enough purchase to divert his header onto the bar.

As it came back down it bounced off keeper Ryan Fulton and Scott McMann got a messy touch that merely invited Hagi to blast home from close range. 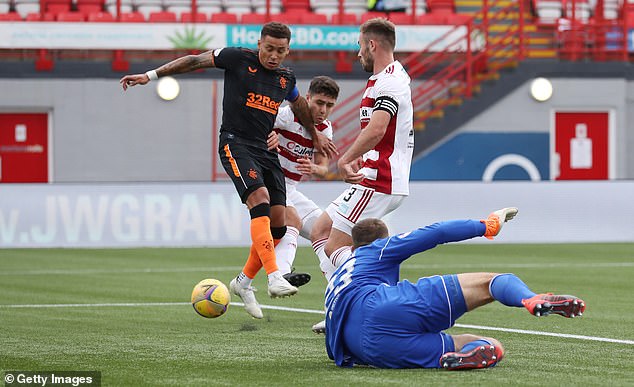 Within another five minutes Rangers doubled their lead from similarly close range.

This time it was Tavernier following up as Fulton pawed away Ryan Kent’s shot.

Perhaps a little too relaxed by his goal, Hagi then wastefully blasted a shot straight at Fulton wile Roofe sliced a shot wide of target.

Rice changed things at the interval, bringing on Jamie Hamilton to play in a back three with Callachan back in midfield and Andy Winter joining Ogkmpoe up top.

Barker, who struggled to convince all evening, slashed a shot into the side net and then Jack, Rangers’ most efficient performer on the day, hit the post with a shot that might have been truer had it come off his stronger right foot. 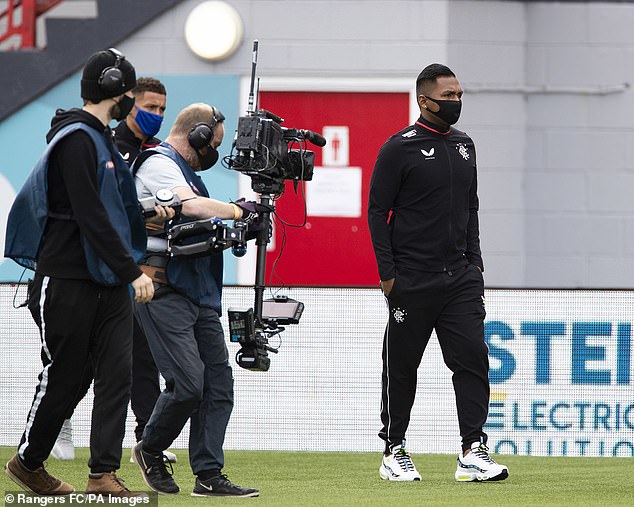 Referee Willie Collum was posed a question when McMann pushed Roofe in the area but pointed to assistant David Dog as he awarded a foul for an infringement against the home defence.

Hagi flitted in and out of the match but wasn’t clinical enough with second-half shots that saw him head and then shoot over when played into scoring positions.

It took a while for Hamilton to properly threaten Rangers’ comfort but having largely steadied the ship they applied some late pressure.

Jon McLaughlin’s five-game run as Rangers goalkeeper has been largely untroubled but he pulled off a sharp, instinctive shot to claw the ball away as Shaun Want powered a near-post header towards the roof of net from Mimnaugh’s corner.

Moments later Hamilton were reduced to ten men as McMann, booed for an early and cynical foul on Kent, did something similar to Barker as he advanced.

He added: ‘First half we were a bit off the pace and showed too much respect to Rangers.

‘When we got up tighter against them second half we acquitted ourselves really well.

‘We could have capitulated at 2-0 but we didn’t.

‘But when thy have two international players sitting in front of the back four it does make it tough.

‘But we kept at it put our bodies on the line and we carry on from here.’