English youth international Harrison, who made one senior appearance for Tottenham Hotspur, notched his first A-League goal in his fifth game and then watched another shot deflect in off Sydney's Paulo Retre for City's second. 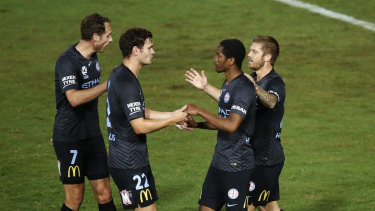 The result at Leichhardt Oval moved City up a spot to fifth and ended a run of six games without a win and seven straight losses to Sydney.

The second-placed Sky Blues are nine points behind Perth with five rounds remaining and just a point ahead of third-placed Melbourne Victory. 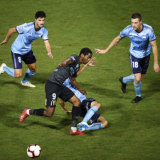 Sydney had the edge in possession and territory but lacked the guile and precision to pierce a disciplined City defence, while the visitors created more going forward.

The home team didn't manage a single shot on target for the game, though they had a few attempts from distance.

Harrison, 21, opened the scoring just after the hour when he slotted the ball past Andrew Redmayne after being released by Kearyn Baccus.

It was the first time this season Sydney had been held goalless in a league game.

A cagey first half produced just one attempt on target.

City midfielder Luke Brattan's fizzing long-range effort in the sixth minute was tipped away for a corner by Sydney goalkeeper Andrew Redmayne.

Sydney suffered a blow midway through the first half when centre back Ben Warland limped off the field.

City also lost a defender when skipper Scott Jamieson limped off with what appeared to be a leg injury.

With rain battering Sydney through the morning, the pitch required an inspection for the game to go ahead with approval given just over four hours before the scheduled start.