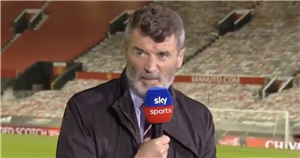 Manchester United have been handed a transfer boost after Harry Kane reportedly told Tottenham he wants to leave in the summer transfer window.

And Red Devils legend Roy Keane will be keen for his former club to land Kane after the striker previously prompted one of the pundit's trademark TV outbursts.

Ole Gunnar Solskjaer's side are among the favourites to sign Kane, after it was reported by Sky Sports that the England captain had told Spurs he wants his future sorted before Euro 2020.

The 27-year-old is said to prefer staying in the Premier League, having also been linked with Chelsea and Manchester City.

United have needed a centre-forward since selling Romelu Lukaku to Inter Milan – and Keane told Solskjaer to sign the prolific striker back in 2019. Keane's comment came after United failed to build on a lead given to them by Marcus Rashford, drawing 1-1 with Liverpool at Old Trafford after a late equaliser from Adam Lallana.

After Gary Neville and Graeme Souness said in the Sky Sports studio that United needed to increase their firepower, Keane insisted the solution was staring Solskjaer in the face.

"Go and get Kane from Spurs," Keane said.

When former team-mate Neville replied by saying "You'll be popular with Spurs fans", Keane gave a shrug of his shoulders and said: "It's easy, just go and get him."

After silencing his fellow pundits – including former United boss Jose Mourinho – Keane added, "What are you all staring at?" prompting howls of laughter.

He then said: "He'd score 20 goals a season for you with his eyes closed."

After it was reported on Monday night that Kane had made a decision on his future, Keane could get his wish.

However, United could face competition from City and Chelsea, with Real Madrid, Barcelona are also among the striker's possible suitors.

And PSG could also enter the race, which would raise the possibility of Kane being reunited with his former Spurs boss Mauricio Pochettino.