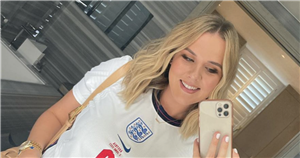 Harry Kane will have the support of wife Kate at Wembley on Wednesday evening as England take on Denmark in the semi-finals of Euro 2020 – with Italy awaiting in the final.

The Three Lions skipper, who revealed details of their relationship back in 2015, has known Kate since childhood and they now share two daughters and a son together.

Ivy Jane Kane was born back in 2017, Vivienne Jane Kane came in 2018, with Louis Harry Kane being born last December with the family also having two Labrador retrievers, Brady and Wilson.

On Wednesday, Kate shared an image to her 171,000 followers on Instagram, showing her wearing Harry's England No9 shirt in a mirror selfie. Her caption reads: "Semi final vibes.."

Harry’s great aunt Bette Bovington, 81, has spoken of his performances so far in this tournament, and insisted that there is no pressure on him from his family.

She told the Mirror: “We were all hoping he would get his goal but there was no pressure from us, but I’m delighted for him.

“He’s done so well from when he was a kid and right through to now – we beat Germany and he’s England’s captain. What more could you ask for?

Will Harry Kane fire England to Euro 2020 glory? Give us your thoughts in the comments

“He’s done something his grandad would have been so proud of."

Harry has said of his form before the fixture: “My game understanding, in terms of what I need to do to not just help myself but the team, is probably at its best in my career so far.

“It is not a problem – if you try and stop me, that’s ok because we have got other players who are just as good, who are going to cause problems.

“It is not the case where you stop me and you stop us as a team. We have plenty of threats, plenty of options, plenty of different ways of playing.

“From my point of view, it is just about assessing that on the pitch, seeing what formation they are playing and setting up, if they are pressurising, if they are tight, if they are sitting off and just trying to adapt my game to that.

"I feel like when I am playing at my best I feel like I can score goals or provide assists against anyone. Hopefully that will be the case tomorrow.”