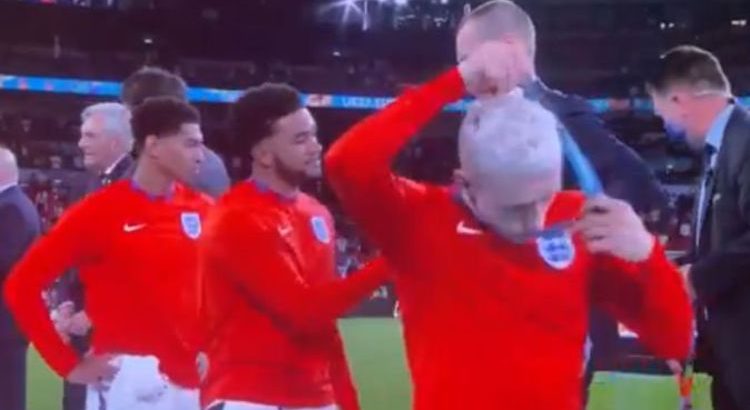 England’s Bukayo Saka was spotted in tears as his team-mates ripped their Euro 2020 runners-up medals from their necks after Sunday evening’s final. Italy were crowned European champions for the fourth time after a nail-biting 120 minutes of football, with the match eventually decided by a penalty shoot-out under the lights at Wembley.

Arsenal utility man Saka missed the crucial spot-kick to hand the Azzurri a deserved victory, with England throwing away an early lead to leave yet another major tournament with nothing to show for their efforts.

The 19-year-old, who was trusted by Gareth Southgate to take the fifth penalty of the shoot-out, was inconsolable as Italy’s players leapt around the hallowed Wembley turf in delight.

He was spotted with tears streaming down his face as a number of team-mates and England coach Chris Powell attempted to comfort him.

Running the rule over Saka’s decisive penalty miss, former Arsenal striker Ian Wright commended the teenager’s bravery in putting himself forward and suggested that England will benefit from Sunday’s heartbreak as they look to put things right at next year’s World Cup in Qatar.

“He’s more than capable of taking that penalty, I don’t think age plays a part in that,” Wright told ITV Sport.

“He’s brave enough to want to take it. You say should he be? Of course he should, he’s in the England team because he’s good enough to be here.

“I’m devastated for everyone, not just Bukayo. I’m delighted that he’s brave enough to go up and take one.

“Italy have to get a lot of credit for the way they’ve played in this tournament. When you relinquish the play to a team in this class, it’s very hard to get it back.

“At the same time I think we’ve done brilliantly to get to where we’ve got to. Gareth’s done fantastic and it’s another learning curve for a young squad.”

Wright’s comments were echoed by fellow ITV pundit Gary Neville, who was full of praise for England’s beaten stars despite the result in Sunday’s all-important final.

“Absolutely heartbreaking for the boy [Saka], but not only is Gareth Southgate going to have to cuddle him, the whole nation is going to need to cuddle him,” said the former Manchester United defender.

“Gone are the days whereby a penalty taker that misses gets criticised and lambasted. Everybody has loved this boy over the last few weeks and they’ll love him for the next few weeks as well.

“He’s been absolutely brilliant, every single one of them. The manager, the staff, the players have been outstanding through this tournament.

“That young man there (Saka) hold your head high because we’re going to look after him over the next few months.

“Gone are the days, we cannot criticise players for missing a penalty. Yes they’re disappointed, but well done to Italy, they deserve it.

“The lads fell just a bit short, but they’ve done us so proud.”