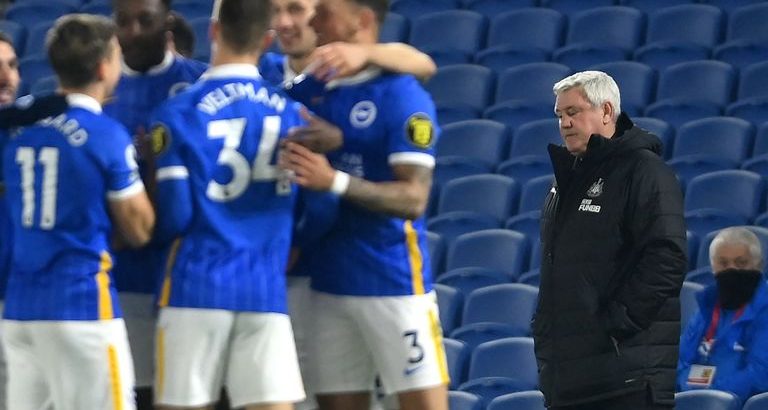 Writing on the wall for miserable Newcastle

Newcastle were outclassed at Brighton and perhaps the most damning indictment for Steve Bruce’s side is that this was no great surprise. Only one point separated them from Brighton before kick-off but the gulf was evident throughout their insipid 3-0 defeat on the south coast. The scoreline was emphatic but it still managed to flatter Newcastle, so desperate was their performance in such a big game.

They had only 34 per cent of possession which would not have been terminal for their hopes had they been able to fashion some sort of counter-attacking game to alleviate the pressure, but that never really materialised. Newcastle mustered only one shot on target. They did strike a post through Ryan Fraser early in the second half but that only led to Brighton going up a gear.

Perhaps Newcastle were unlucky that all three of the home side’s goals were excellent, a trio of truly marvellous finishes that could hardly have been more out of character with their wasteful season in front of goal. But Brighton deserved it for the endeavour so absent in their opponents’ game.

Adam Lallana, the injury-prone 32-year-old playmaker operating in a deeper role in midfield, might have been vulnerable had Newcastle pressed him. We will never know. Lallana was afforded the freedom of the Amex Stadium. Picking passes for fun, he was untroubled throughout.

Where do Newcastle go from here? The feeling is that the ever unpopular owner Mike Ashley will not truly panic until they drop into the relegation zone and, for all their problems, Bruce’s team, without a win their last five matches, remain two points ahead of Fulham with a game in hand.

But the writing is surely on the wall unless something changes. Injuries in attack have left Newcastle completely impotent and they do not look solid enough at the back to limp over the line without scoring. Fulham have work to do to overhaul them but relying on results elsewhere only highlights the paucity of ambition on Tyneside. A dismal night for Newcastle. A dismal season.
Adam Bate

What a time to cash in your expected goals. After thrashing Aston Villa in a goalless game, losing to Crystal Palace despite dominating, before being beaten by the same scoreline against Leicester having led for almost an hour, Brighton finally produced the result to match the performance at home.

The forwards have been criticised, and rightly so, but there were some exquisite finishes at the Amex Stadium to take the game away from Newcastle. Leandro Trossard found the far corner from distance before Danny Welbeck did the same. Neal Maupay’s volley might have been even better.

Perhaps the margins were finer than the result suggests given the outrageous quality of the finishing and the fact that Fraser had hit the post when only one goal separated the sides early in the second half. But this was the sort of victory that Brighton had been hinting at delivering all year.

Graham Potter has had to face up time and again, stressing that his team would stick to their principles, keep passing that football and that the wins will come. This was vindication and now that it has happened, doesn’t it all seem so obvious? Brighton are a good team, far superior to Newcastle.

They just had to show it. Now they have and the fear of relegation retreats from their thoughts. With a bit more luck and a tweak or two in the summer, they need not find themselves in this position again. And just as well. Playing like this, the Premier League would be poorer without them.
Adam Bate

It has been a bruising week for Patrick Bamford. Having hobbled off with a hip injury during the stalemate with Chelsea, the Leeds striker was overlooked by Gareth Southgate ahead of England’s 2022 World Cup Qualifiers later this month.

But the 27-year-old dusted himself down from that disappointment to provide a timely reminder of his qualities, scoring his 14th Premier League goal of the season and providing the assist for Raphinha’s winning goal in Leeds’ 2-1 victory over Fulham at Craven Cottage.

When asked if his international omission had provided extra motivation, Bamford told Sky Sports: “It was in the back of my mind a little bit, I guess. It always gives you a bit more fire in your belly.

“Every player who gets called up fully deserves it. There’s a lot of people who may have thought they would get called up and are slightly disappointed, but I’ve just got to keep doing what I’m doing. I need to keep putting my name in contention for the Euros.

The striker admitted afterwards he did well to last 76 minutes given his condition – not helped by a knock sustained to the knee during the opening period – but Marcelo Bielsa was right to take no chances. While international recognition still awaits Bamford, his value to Leeds has been established for some time.
Ben Grounds

Much of Fulham’s season has been defined by defensive frailty. They shipped far too many goals early in the season, which has ultimately left them two points from safety with eight games left to play.

After the arrivals of Tosin Adarabioyo and Joachim Andersen in October, things at the back improved dramatically – but glimpses of the early-season Fulham were back.

The two centre-backs had their struggles on Friday – neither had been at the club in a 4-3 defeat to Leeds earlier in the season. Adarabioyo made eight clearances in the first half, with no other Fulham player making more than three, but he was beaten too easily for Bamford’s opener. He could arguably have done more for Leeds’ second too.

Andersen scored a great equaliser – where Leeds showed some chaotic defending themselves – but cannot profess to have had his best game in a Fulham shirt.

Former Fulham goalkeeper Mark Schwarzer told Sky Sports: “There are defensive frailties there. They’ve conceded 38 goals so far this season and they’ll be disappointed with both the goals tonight. Tosin doesn’t make the last-ditch challenge for Raphinha’s goal that you need from your centre-half. He went with his wrong foot. He needed to make that block.”

It ultimately felt like a step backwards for Fulham. They would have been brimming with confidence heading into the Leeds game after recent results, but looked nervous and were unable to really impose their game on Leeds.

Three points would have taken them out of the bottom three for the first time since December 20, but they missed a big opportunity with only a handful of games remaining. Scott Parker now has two weeks to find that last push for Premier League survival.
Charlotte Marsh

City’s depth is the key to the quad 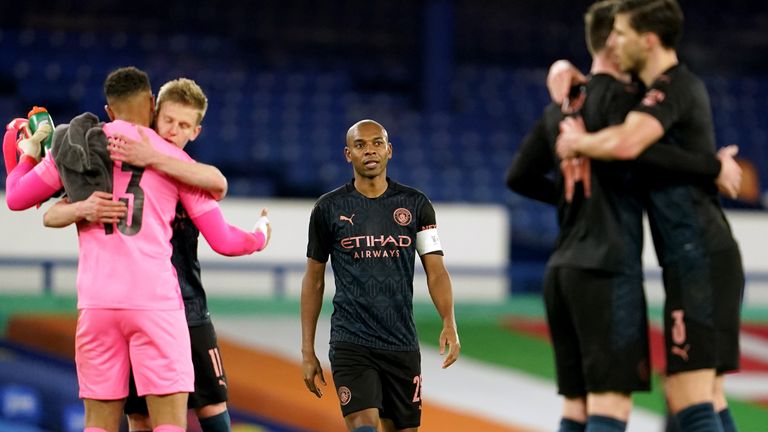 Kevin De Bruyne came off the bench to seal it but the fact that he was there at all might offer the biggest clue as to why Manchester City’s quadruple hopes are realistic whatever Pep Guardiola might be saying publicly to downplay his team’s chances of an historic accomplishment.

Everton held firm for 84 minutes until Ilkay Gundogan nodded home the breakthrough goal but hold firm is about all Carlo Ancelotti’s side were able to do. City pushed and they probed, playing with an impressive combination of urgency and patience. It helps that this squad seems so fresh.

Phil Foden looked bright from the outset but then this was only his third start in the last seven. Raheem Sterling had been drafted in for this one after seeing only 20 minutes of action in the previous three matches. Sergio Aguero, Joao Cancelo and John Stones were unused subs here.

Guardiola is keeping his big squad hungry and the rotation is so regular, the games so big, that the entire squad know that they will all have their moments in the next few months. History beckons. It is an achievement made all the more possible by the depth at Manchester City’s disposal.
Adam Bate

Ancelotti satisfied, but are Everton fans?

Carlo Ancelotti seemed satisfied to concede defeat to the “best team in the world” having kept Manchester City at bay for 84 minutes, but not all Everton fans will feel the same.

“I am satisfied because we competed well against the best team in the world in this moment,” said the Italian, but even the world’s best teams have off days, and this was looking like City’s for large periods of Saturday’s quarter-final.

If you know an avid Everton fan, you will know how much cup competitions mean to the supporters. Approaching 26 years since their last piece of silverware – too long for a club of Everton’s size – 14 teams have won a trophy since, and six of those are not even currently in the top flight. Long-suffering Everton fans want their day in the sun.

Ancelotti will argue Everton did all they could. Sitting back in the first half, they had registered just 17 passes to City’s 209 after 25 minutes, and the plan to bite on the counter and magnify set-pieces almost worked.

It is also easy to say City looked sub-par, when Everton’s hard work made them look that way. If Ancelotti’s side had gone for the throat, they may have been hit earlier.

But Everton failed to commit men in the second half, and Ancelotti’s first sub came 87 minutes in, three minutes after City’s opener, too late in the view of many. It felt more like a missed opportunity than an outclassing, whether or not City are the best team in the world.
Gerard Brand