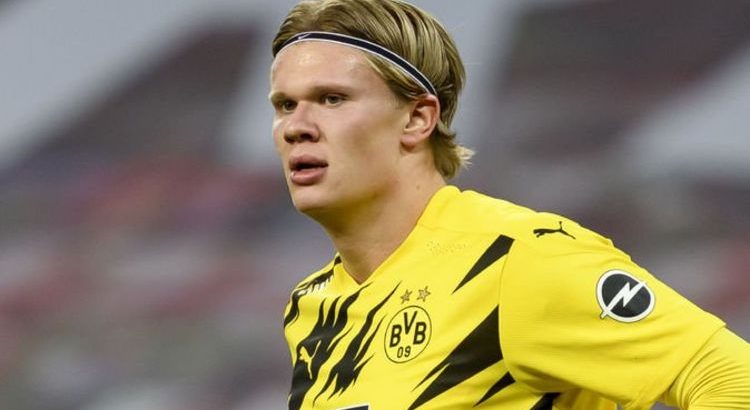 Borussia Dortmund striker Erling Haaland has fuelled rumours that he could be heading for the exit door this summer. With his release clause not active until 2022, Chelsea are believed to be the main contenders for his signature in the coming weeks.

According to German journalist Christian Falk, when Haaland was asked if he would stay at BVB or leave for Chelsea, he simply smiled and said nothing.

The most you can say about his minimal response is that it is certainly not a statement of commitment to his current employers.

In a strange way, his silence will be music to the ears of Chelsea fans who are reportedly the only club willing to meet Dortmund’s £150million valuation this summer.

Other clubs like Manchester City and Manchester United have flirted with the idea at various points in the window, although Thomas Tuchel’s side now seem to be in pole position.

The Leeds-born front-man is thought to be intrigued by a move to the Premier League, having lived in England for the first three years of his life.

The 20-year-old joined Dortmund 18 months ago and scored 41 goals last term in his first full season with the club.

Shockingly, that was the youngster’s second 40-plus goal season in a row since breaking into the Red Bull Salzburg first-team in emphatic fashion.

Although Chelsea are right in the mix this summer, the general belief is that Madrid would hold the upper hand if the transfer saga ran into 2022.

At that point, the Norwegian’s release clause would become active, making him available for around £65m.

With every top club vying for his signature on a level playing field, there is reportedly a firm belief at the Bernabeu regarding Haaland’s desire to play for the club and Real Madrid would be confident of landing him.

Indeed, some reports indicate that the striker has already reached a pre-agreement with Madrid ahead of a prospective move in 2022.

Links between Haaland and Real have persisted since the player and his entourage met the club earlier in the year.

If Chelsea were to test the player’s desire and his club’s resolve with a monumental bid, it would certainly make matters interesting.

With Madrid ready to swoop and a Jadon Sancho-less Dortmund potentially unwilling to let another of their star attackers leave, the odds may well be stacked against the west London side.

Haaland’s silence when put on the spot, however, could mean many things, and remaining in Dortmund for too much longer does not seem likely.