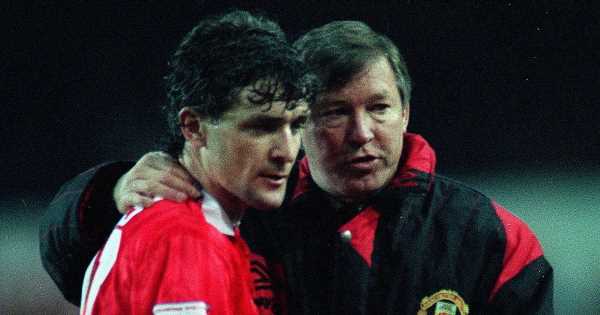 Mark Hughes has held his hands up and admitted he invented the legend of Fergie's hairdryer.

'Sparky' was brought back to Old Trafford from his unfulfilling exile at Barcelona by Alex Ferguson in 1988, and Hughes was a key influence in landing Manchester United's first trophies under the growling Scotsman's rule.

Hughes, who won two Premier League titles, three FA Cups, the League Cup and European Cup Winners Cup with United, admitted: “I know it has been said that I came up with the term ‘the hairdryer’ over the blasts he would give the players.

“I honestly don’t know – I think it first came up in something the former United correspondent for the Manchester Evening News, David Meek, wrote in an interview with me.

“I must have mentioned it. Whether it was later embellished, I don’t know. I had said at first it was like standing next to a blow torch. That then became a hairdryer.

“He would stand so close to you while he was giving you a bollocking and I would imagine the cartoon where the character’s hair is standing on end from a blast of hot air. So yes, maybe I’m guilty of calling it ‘the hairdryer’. It’s certainly stuck.

“He wasn’t averse to giving me the hairdryer – I had a few blasts. I used to frustrate him because, on occasions, I was a bit loose with possession of the ball. I could hold onto it a bit too long and get dispossessed.

“We were playing Leeds United in a FA Cup game at Elland Road in 1992 and I miscontrolled a throw-in about 10 minutes into the game.

“I’ve since seen a clip of it on the TV and he rushed to the side of the pitch and shouted at his assistant Brian Kidd to get me off. At the time I had been oblivious to all this.

“Kiddo evidently placated him saying, ‘There’s only 10 minutes, gone for goodness sake, calm down’. I actually scored the winning goal, but he still wasn’t happy and I had to apologise for losing the ball.”

“I think sometimes it was premeditated. He would think in his head, ‘I’m going to nail you,’ hoping for a reaction from his victim.

“You quickly learned not to be the person to lose possession just before half-time. If you were the last one who had just lost the ball before the referee blew for half-time, you were getting it because that would have been the last thing he remembered before coming into the dressing room.

“It got to the stage where nobody wanted the ball if you knew half-time was approaching.

“I think Pally (Gary Pallister) must have got 10 times more bollockings than anybody because he was always first through the door.

“But it didn’t bother him. He just went out with the attitude, ‘I’ll show you' – and that’s the difference between then and now.

“Nowadays, if a player gets a bit of stick from the manager they go straight to their agent saying, ‘I can’t play for this man. He doesn’t like me. I need to move’.

“We just used to say, ‘Sod that, we’ll show you we can play’. It was a different attitude.”