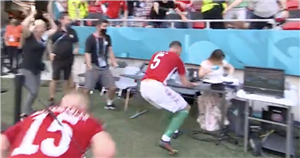 Hungary ace Attila Fiola wiped a reporter's notes off her desk after opening the scoring against France.

And he was clearly delighted, sprinting away before leaping over a barrier, near where a reporter was sat.

A woman was sat behind a desk but soon saw her work wiped away from her by Fiola, who celebrated wildly.

France had a number of fine opportunities in Budapest before going behind on the verge of half-time.

"When Fiola gets on this he's got one thought on his mind – drive into the box. make Varane make a tough decision.

"He can't bring him down now and he composes himself and sticks it away. That stadium has just gone absolutely mental. It's a brilliant finish."

While Dion Dublin added: "What a goal that was! I did say they move forward at pace, with red shirts flooding forward as well.

"Fiola went from way back at left back, he thought 'I'm going to go in behind and stick it in the corner'