It’s the stain on his international career that Graham Arnold is desperate to erase – his last match for the Socceroos, on a night that left a deep scar on the psyche of Australian soccer.

It was November 29, 1997 at the MCG. Australia were 2-0 up against Iran and seemingly poised to end the nation’s long exile from the World Cup finals. 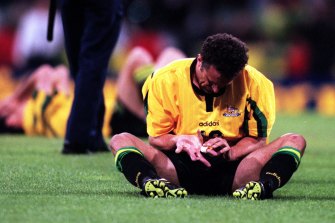 Graham Arnold cut a shattered figure after Australia’s 2-2 draw with Iran in 1997 – his last match for his country.Credit:Tim Clayton

Then serial pest Peter Hore – or “that lunatic”, as Arnold remembers him – ran onto the field, threw himself onto the Iranian goal netting and caused a lengthy stoppage early in the second half, after Australia’s second goal.

“It’s amazing how many people still talk about it,” Arnold said. “I remember all the players on the pitch at the time, they came over and it was really a breakdown in the game. Mentally, we switched off. Instead of driving the 2-0 forward we switched off and they got back straight in the game to 2-2 [Australia lost 3-3 on aggregate due to away goals].

“It was devastating. Seeing Terry Venables after the game, the way he was – it was the most unjust result he said he’s ever seen in his life. It was a sad way to end my international career.”

Almost a quarter of a century on, the opportunity for redemption may be just around the corner. Arnold has just steered the Socceroos through a flawless first section of qualifying for next year’s World Cup in Qatar, having notched wins over Kuwait, Taiwan, Nepal and Jordan over the last two weeks. 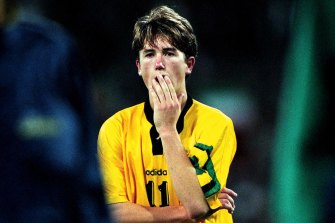 Now it gets harder. In less than two weeks, the Socceroos will find out which five other teams they’ll be drawn with in the crucial next round, where a top-two finish in their group will clinch a spot at the World Cup finals.

One of the possibilities is Iran. Incredibly, Australia has not faced them once at senior level since that infamous night in 1997, with fate still keeping them apart even after the country’s move from Oceania to the Asian confederation in 2006. 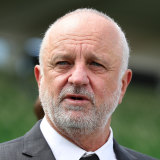 Fate could again intervene and stop those demons being exorcised on Australian soil, with COVID-related travel restrictions highly likely to block the Socceroos from playing at home for the remainder of this year – a fixture many fans have dreamed about for years.

But Arnold doesn’t want to wait any longer. “Bring Iran on,” he said.

“It’s a memory that is always there an d it’s one I want to fix. It was the last time I kicked a ball for the national team. I retired straight after that.

“We get Iran and wherever we play, it doesn’t bother me. It doesn’t matter who we play, where we play, we go out on the pitch expecting to win every game, and we play our way. That’s with a lot of energy and our principles remain the same.”

The draw for the next round of World Cup qualifying will be conducted on July 1, with the Socceroos to be grouped in the same pool as South Korea – meaning they cannot be drawn in the same group. According to FIFA’s projected world rankings, Australia will face one of either Japan or Iran, Saudi Arabia or the UAE, Iraq or China, Oman or Syria, and Vietnam or Lebanon.

The first matches are due to be played in September but Arnold – who is staying overseas ahead of the Tokyo Olympics, where he will coach Australia’s under-23s – freely admitted he had no idea where they would be played, and told his players as much before they broke up camp.

“I said to the players after the [last] game I can’t tell you what’s going to happen after this,” he said. “Will A-League players be able to play for the Socceroos this year? I don’t know. I’m hearing the A-League competition is going to start at the end of November. If that happens, how can the boys be match-fit for September, October, November?

“How will the government deal with all this stuff and us playing at home? I’m not sure if I signed up for that type of stuff. I sit here today and I can’t come home and see my wife and my kids because of all the quarantine rules.

“It is what it is. I don’t know if we’ll play in Australia at all this year and where we’ll play overseas, I’ve got no idea.”

Arnold said he felt “concerned” for the mental wellbeing of some of his staff, who have returned to Australia for two weeks in hotel quarantine – having just spent three weeks in a highly-strict hub environment in Kuwait. Everyone in the camp was confined to a hotel at all times except for training at night, when the searing Middle Eastern summer heat was still almost unbearable, and a 10-minute window during the day when they were allowed to see the sun.

“It was a really, really tough camp mentally,” he said.

“But the culture that we’ve built, the family culture of brotherhood and the family of the Socceroos, they really stuck together, they had some great fun. I’m getting goosebumps now talking about the boys because they were just incredible – easy to manage.

“What the boys achieved was fantastic. I look forward to what’s next.”