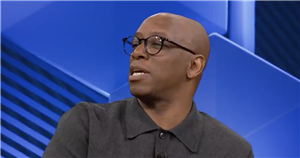 Match of the Day pundit Ian Wright has disagreed with Chelsea manager Thomas Tuchel over a “lazy” star in his squad.

The German saw his side come back against Pep Guardiola’s Manchester City to steal a 2-1 victory at the Etihad Stadium.

And the line was led by Timo Werner, who grabbed an assist for Marcos Alonso in stoppage time to clinch the win.

It saw Tuchel heap praise on the German, who is not the top assist-maker for Chelsea with 14 and joint-top scorer on 12.

Speaking to the show after the match, the German said: “In the last week he’s really adapted well to the situations.

“The way he works he’s relentless. He really wants it and I am very happy with his performance today.”

But Wright had a different take on Werner’s performance against the Premier League leaders.

Speaking on the BBC’s flagship football show, the Gunners legend said: “I think Timo Werner is having a good season.

“Coming to Chelsea with that pressure of scoring goals and then missing chances.

“You need to look at the runs he makes. He needs to get back onside. He doesn’t get on side.

“Once he sorts that out, he will get more chances, then he will need to be more clinical.”

Wright referred to two moments in the game where Werner put the ball in the back of the net but saw both ruled out for offside.

The first game after half an hour when he guided Reece James’ low drive into the top-right corner past Ederson before the linesman’s flag went up.

And the 24-year-old had the beating of America Laporta with 10 minutes to go before slotting into the net – but the match officials once again saw him offside.

Werner will get another chance to score against City, though, as Chelsea take them on in the Champions League final on May 29.

READ MORE:Chelsea duo expected to leave for Serie A as Thomas Tuchel overhauls side