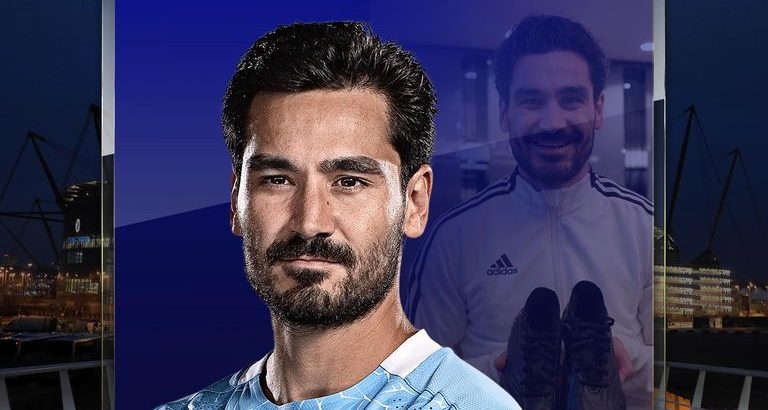 Ilkay Gundogan is trying to think of his favourite goal of the season and for the first time in half an hour he is struggling to find the words. There have been 14 of them and he is not used to having so many to choose from. He settles on his second against Tottenham.

But only after an important caveat

“Not because of the goal I scored,” Gundogan tells Sky Sports, anxious to quell any accusations of boastfulness given the way he so skilfully left Davinson Sanchez flailing behind him. “But because I saw the images of Ederson on television after I scored.”

The Manchester City goalkeeper had provided the assist for the goal.

“Seeing the happiness and the smile on his face was just great. It is not about my own personal success. In those situations, it is about the team.”

It is a sentiment that sums up City’s reluctant goalscoring hero. His 11 goals in 12 Premier League games this winter transformed their season and have all but decided the title race.

It is, by some margin, the greatest goalscoring run of the 30-year-old midfielder’s career, even if he does recall being a free-scoring No 10 in his academy days. “My numbers were quite good back then but it is something you cannot compare. That was youth football.”

Even now, despite all his experience, there is a sense he is still coming to terms with this unexpected role as Manchester City’s top scorer – the top scorer in the whole of the Premier League since being deployed in a more advanced position back in December.

“It is kind of weird, to be honest. It is something that I am not so used to. I am not the sort of guy who likes to be the centre of attention but I just have to deal with it.”

Adulation usually reserved for Sergio Aguero and the rest is now coming his way instead.

“You get more text messages,” he adds. “Not really more from family and friends. The people who are close to you, the most important people, they always text and call you no matter how the football goes, no matter how well or how badly you are performing.

“But in general, of course, especially on social media platforms, you get a lot more recognition. More people texting, more people commenting on your photos.” 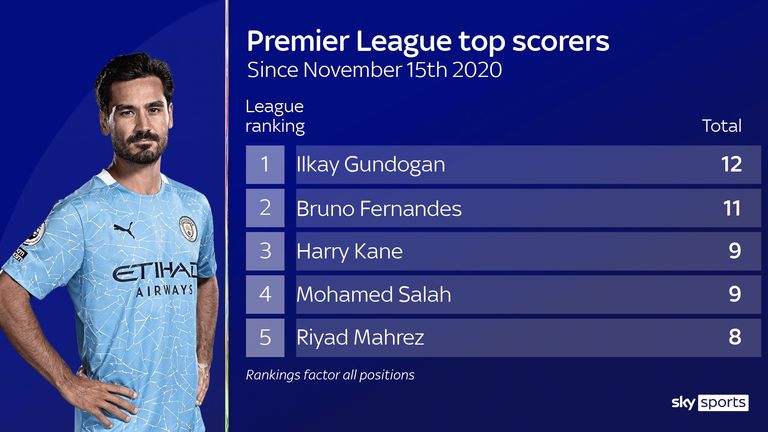 There is a certain distance, a bemused smile on his face as he strokes his chin with the forefinger of his right hand. For all the fuss, he does not even agree that he is playing better.

“I feel like this is maybe not the best form of my life as lots of people are saying. In terms of numbers, I have the best numbers that I have ever had in my career. This is something that I cannot deny and of course this is also what keeps people’s attention.

Gundogan is much more interested in the team’s success. “This is how I define my happiness in terms of football.” And that is why Pep Guardiola rates him as perhaps the most unselfish player that he has ever worked with. Over the course of a lengthy interview, Gundogan leaves no room for doubt – he remains the ultimate team player.

“I am far away from saying that I want to keep on scoring,” he says.

“If I have to sign a document that says I am not going to score any more goals this season but my team are going to win all of the trophies I am going to sign that document right now.

“It is about putting your ego to one side and allowing the team to shine, not just yourself.” 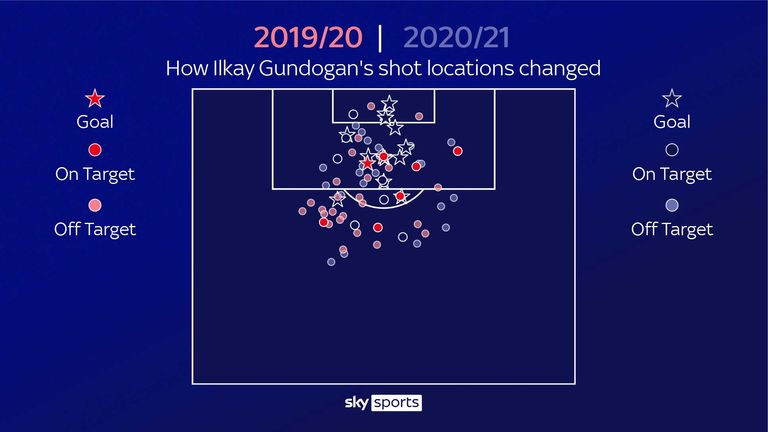 Yet, scoring is part of Gundogan’s remit now. “Playing closer to the opposition box,” he says. “Trying to make the right runs at the right time.”

Initially, he insists this adjustment to his role came easily to him.

“The manager always knew that I was able to play that position. I have played it in the past, it is not like it is completely new for me. So I knew what to do.”

But dig a little deeper and Gundogan reveals the mentality shift that was required for him to make the change from metronomic midfield pass-master to become City’s fox in the box. 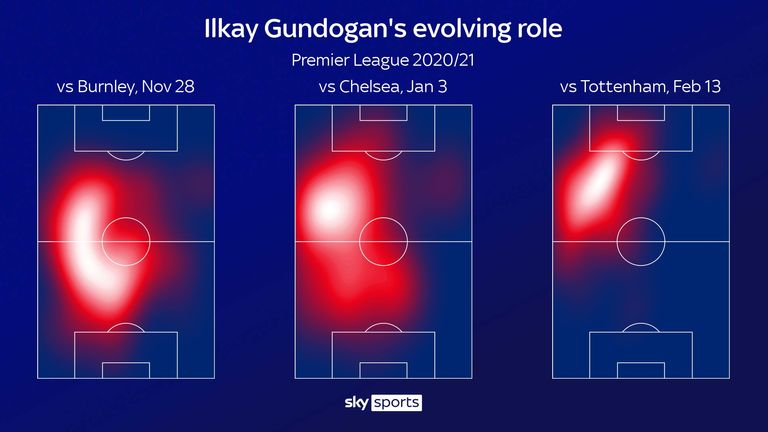 “You also need to get used to the number of passes that you miss. When you are in your own half, involved in your own build-up play, out of 100 passes you should make maybe one mistake but no more than that. The amount of mistakes you are able to make is so tiny.

“When you come closer to your opponent’s box, if you play 100 passes and only five of them come off but those five lead to a goal then it is not such a bad outcome.

“So it is different, something that I had to get used to, to be honest. It is not something that was straight away there. But by playing more and more in this area, gaining confidence, just repeating the routines, it is at the point it is right now, which is quite a good one.” 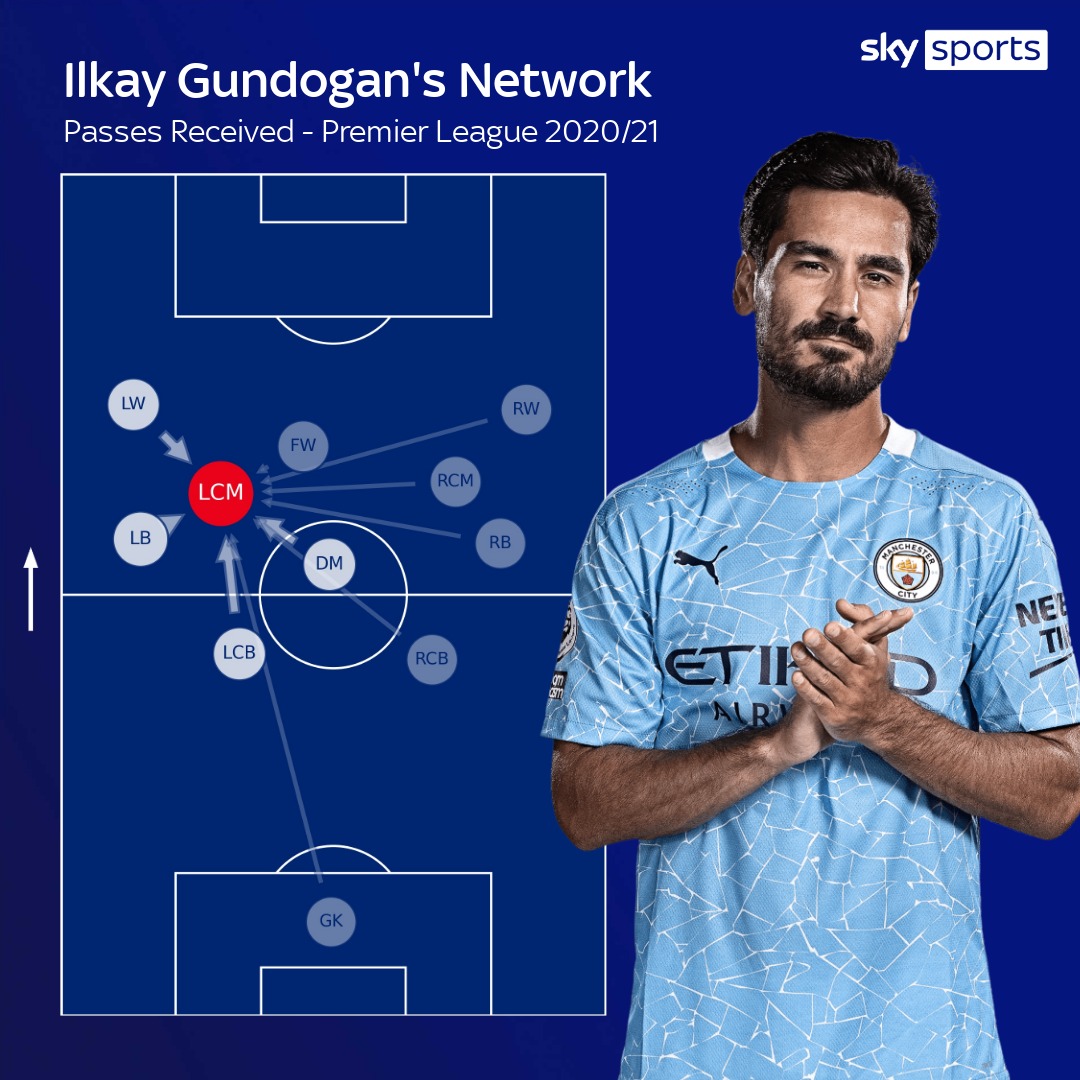 The 18-yard box can be a chaotic place but Gundogan brings calm. His first goal against Tottenham was a fine example of that, exchanging passes with Raheem Sterling as if they were lending the ball to each other in midfield rather than closing in on goal.

He has brought the order of a playmaker to the penalty box.

“I am someone who tries to reach for the perfect game even though I know it is not possible. I never want to make a mistake. I never want to mishit a pass. Even playing a pass that finds my team-mate but finds his wrong foot is, for me, not a good pass.

“This simplicity of football is very important to me. Playing in a holding midfield role it is even more important. Playing more offensive, the importance is maybe less. The acceptance you have to bring to this position, the acceptance there that you are going to fail with a pass, is quite normal. This is something that I probably still need to get used to.” 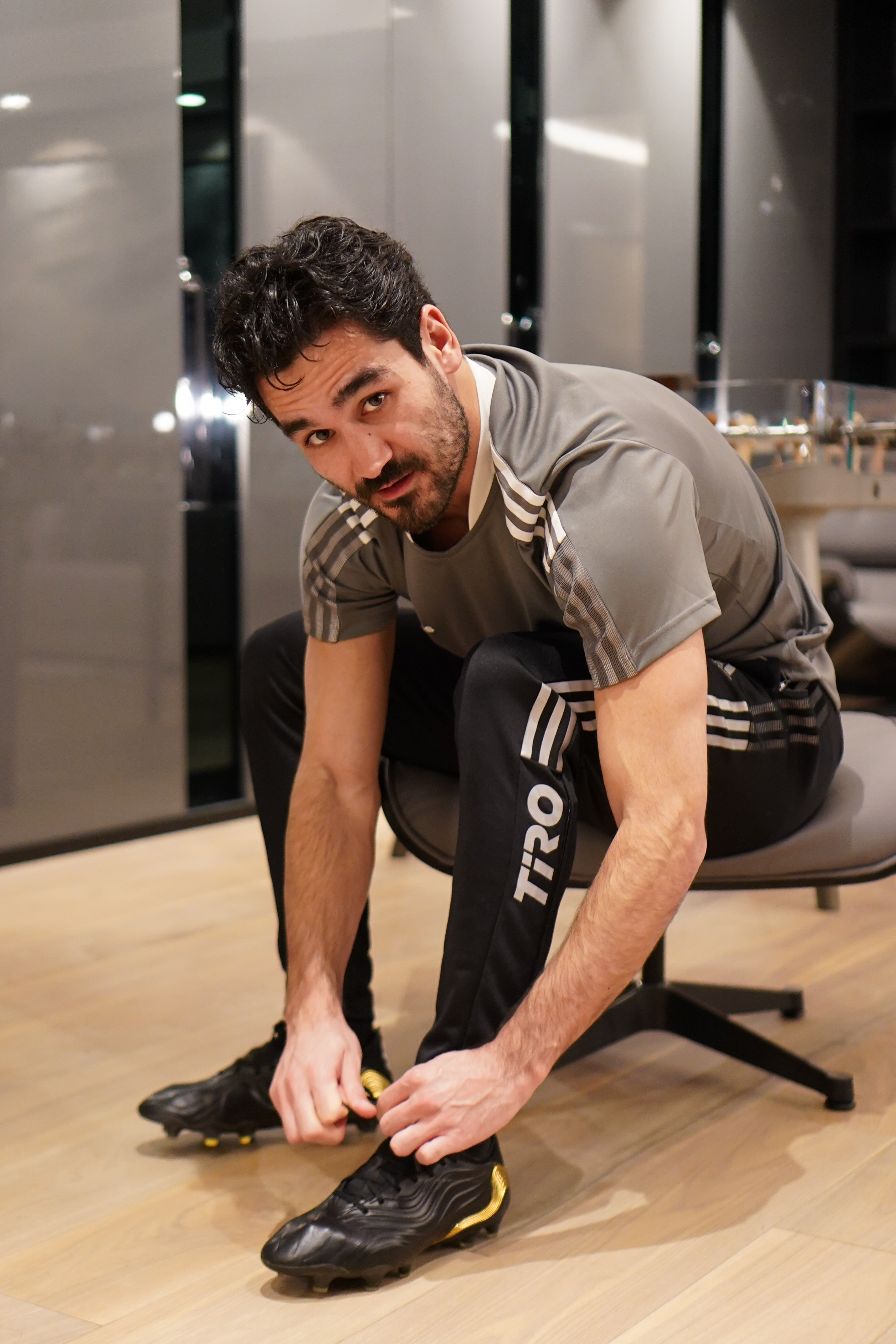 If it has been difficult, Gundogan has made it look easy. City have made it look easy. Twenty-one wins in a row mean they are now favourites to win all four competitions that they have entered this season. It is a far cry from the autumn when there were doubts over the team’s system and mood. So, why did it click and click so dramatically?

“I think there are a couple of tactical details. Our build-up play improved so much compared to the beginning of the season that it just gives us offensive-minded players that opportunity to play with a little more freedom and not think too much about whether the ball will arrive because we know that at one point it will arrive, we can be quite sure of that.

“Credit must go to our defenders and our holding midfielders like Rodri and Fernandinho who are obviously involved a lot in bringing the ball from our defence to our offence. We can rely on these guys. Then it is about our freedom and finding the right positions.

“It is not just how we defend but it is also how we attack with Joao (Cancelo) coming into midfield, giving us one more opportunity in our build-up play, making it a bit more fluent.”

Gundogan’s relationship with Cancelo has been one of the features of Manchester City’s season with the nominal full-back joining the midfield and allowing his team-mate to venture further forwards. When Cancelo makes that move inside, Gundogan is released.

“It is kind of a trigger,” he says. “But I also need to know when his head is up. When is the ball in the right position for him to play it through or behind the defence. It is not just that he gets the ball and I run. There is much more to the game than that.

“It is not just that you make the run and expect that the ball comes either. You make the run and it opens up spaces for others to break into. The best teams in the world, unless you have a superstar like Messi or Ronaldo, that is how they succeed.

“It is a big part of our game. Not just with Joao. There is Rodri, the defenders even. When I play with Raheem on the wing on my side or Phil (Foden). It is about the connections that you have with each other.

Gundogan speaks with genuine warmth about his team-mates and it is no wonder. “My family at the moment are the people I see every day on the training ground.”

Lockdown has been tough on those with family far away. It was only recently he was able to lay eyes on his new niece for the first time despite her being born before Christmas.

“It has been challenging, I cannot deny that. I have not seen my family for a long time. But I still feel connected on video calls with my family and my friends and I know millions of people are in a much worse situation than I am so I try not to complain too much. The fact that we are busy and not just sitting around at home is something that I really appreciate.”

Perhaps the reward will come soon. Another Premier League title appears inevitable. A domestic cup or two would be no surprise. But, in this form, it is the prospect of adding the Champions League trophy to Manchester City’s collection that might appeal most.

Winning the lot is a possibility, he concedes.

“It also felt like it was for the last few years. But we were always missing on something. There is no other choice than for us just to go for it and try to do better, see it as a new possibility, a new chance, even though it is challenging.”

As for his role in that, Guardiola recently floated the idea once more that Gundogan could play as a striker if required. Could there yet be another twist for City’s reluctant goal hero.

“If I have to, I am ready. It does not matter where my manager wants me to play. If I have to go in goal or play left-back or right-back, I will try to do my best, I will try to see what is demanded, what the manager expects from me, and try to do the best possible job.”

Nobody would expect anything else from Ilkay Gundogan.