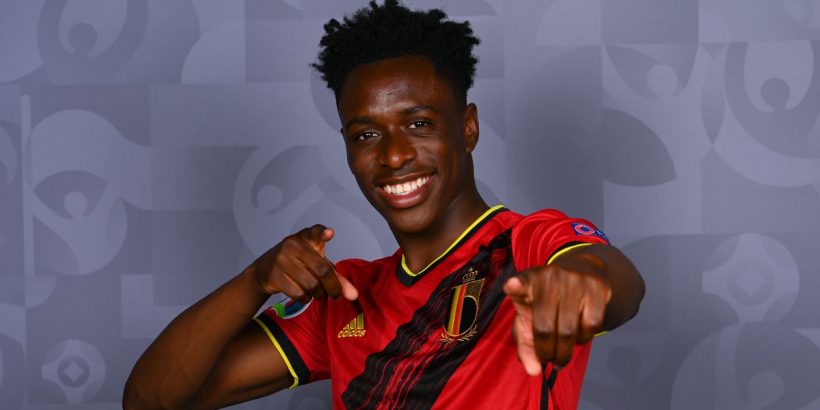 Albert Sambi Lokonga looks set to take an unusual shirt number when joining Arsenal from Anderlecht this summer as Mikel Arteta eyes a midfield overhaul at the Emirates.

The 21-year-old has made 69 senior appearances for the club since his debut at the age of 18 back in 2017, and has also played for three different Belgium youth sides.

During his time at his current club, Lokonga was worn a memorable shirt number, and could pick it up again in north London following his period of quarantine and successful medical tests.

Having opted to wear 48 in the past, the £15million agreement with Anderlecht could be followed by the unusual print for the club shop, with only two players previously taking that number.

According to Belgian outlet Nieuwsblad, the decision was based on Lokonga's postcode.

His hometown of Verviers goes by the code of 4800, and that is said to be his inspiration.

That comes as the numbers four, eight, 10, 18, 23 and 25 are still available, one of which could be snapped up by Ben White as he moves closer to a £50m switch from Brighton.

The duo look set to become the second and third incoming deals following Nuno Tavares from Benfica, with Arteta watching his side lose to Hibs and draw with Rangers so far in preseason.

Will Arsenal compete for a top four finish this season? Give us your thoughts in the comments section

“Now a little bit of recovery. We trained really hard, played two games, and now we’re going to be travelling to America in the next week,” Arteta said on Saturday.

“We didn’t have any injuries which is really positive in the first week. We’re going to have some new faces arriving probably, so very positive.”

The Spaniard could well be referring to Lokonga and White, who could be seen as replacements for the departed David Luiz and Serie A bound Granit Xhaka next week.

"The squad needs changing." said Arteta back in May.

"There were already a lot of changes in December, something that has not been done in years, but it tells us where we were. Things are going to have to change and the owners are going to back it up."

Adding: "Time is catching up right now. It's a trend, it's years now that this has been happening. If the distance and the margins with the rest become too big, then it's almost impossible to do it."