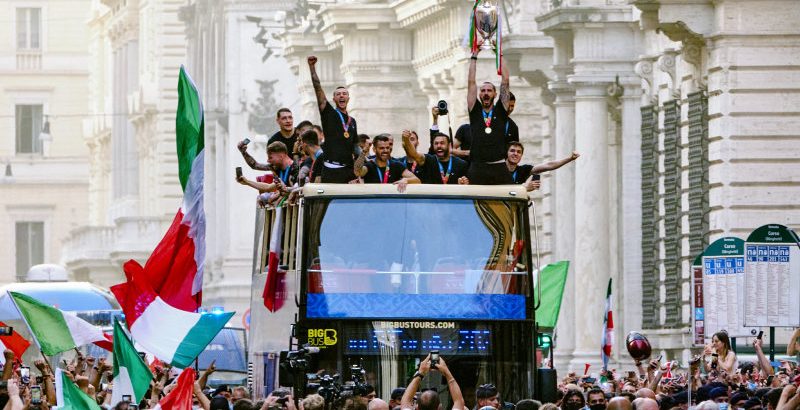 Rome: Thousands of fans packed Rome’s sidewalks to wildly cheer Europe’s new football champions as Italy toured the city in an open-topped bus on Monday evening (Tuesday morning AEST), crowning a day that saw them honoured at the presidential palace and cited by the Pope.

The first Italian team to win the Euros in 53 years knew they were in for an exhilarating day when they arrived at Rome’s Leonardo da Vinci Airport at dawn from London to be welcomed by a banner on the tarmac reading, “Grazie Azzurri.”

To rousing cheers from airport workers, captain Giorgio Chiellini pumped his fist in the air, and coach Roberto Mancini hoisted the trophy high over their heads. There was even a cheer for defender Leonardo Spinazzola, as he hopped down the steps on one foot, his other in a cast from an Achilles tendon injury.

Italian president Sergio Mattarella was at Wembley Stadium cheering with Azzurri fans as Italy won the Euro 2020 final following a 3-2 penalty shootout win over England. Then Mattarella raced back to Rome to be at the Quirinal presidential palace to greet the team.

“I’m not a commentator,” the president said, “but I thought you deserved the victory well beyond whatever happened during the penalty shootout.”

Coach Mancini replied, “Let me thank you for being our No.1 fan. We saw you exult, that gave us much pleasure.” 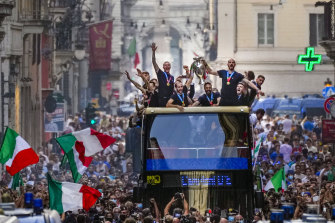 Italy’s victorious Euro 2020 squad take to the street in Rome.Credit:AP

In another compliment, Mattarella said, “You displayed a harmony of team among yourselves and in play, and now this is an extraordinary value, the sense of sport.”

“This,” captain Chiellini said, “is the success of a group, who even in difficult moments never lost heart.”

Mattarella also generously praised another of his palace guests, tennis player Matteo Berrettini, who reached the Wimbledon final before succumbing on Sunday to Novak Djokovic.

The tennis star, in thanks, gave Mattarella a raquet, and later squeezed aboard the open-topped bus among the footballers, who whooped and cheered themselves in response to the public’s adulation. 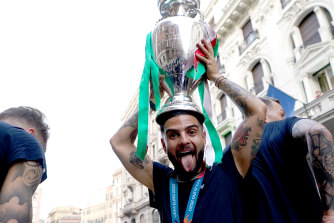 As the bus inched its way toward central Piazza Venezia, and eventually to the team’s hotel, the players, each wearing the victory medal they received less than 24 hours before at Wembley, snapped photos of the celebrating fans and encouraged them with cheers through a bullhorn.

There was enough joy to go around to even reach the 10th-floor hospital suite of Pope Francis, who, even before the Italian victory, could savour the triumph of the team from his native Argentina, which won the Copa America on Saturday.

“In sharing the joy for the victory of the Argentine national and of the Italian national squads with the persons near to him, His Holiness dwelled on the meaning of sport and its values,” Vatican spokesman Matteo Bruni said in an update on the pope’s convalescence in Rome following July 4 colon surgery.

Bruni said Francis spoke of “that sporting ability to know how to accept any result, even defeat.” 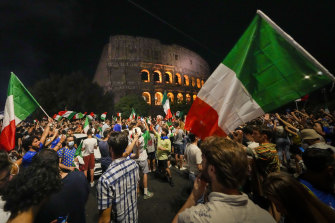 Fans celebrate at the Colosseum in Rome after Italy’s penalty shootout win over England.Credit:AP

In between the formal celebrations, some Italy players made a quick stop at a military hospital to receive a second dose of the COVID-19 vaccine, state TV said.

For Italians, the championship was a new beginning for their youthful national team and a country that has been yearning to return to normality after being the first nation outside of Asia to be slammed by the COVID-19 pandemic.

A cacophony of honking cars, fireworks, and singing fans filled Rome on Sunday night as thousands of people took to the streets following the final. As the sun rose on Monday, the noise had died down but not the sentiment.

“It seems to me that this victory is so good for the national spirit after all that suffering for COVID,” said Daniela Righino, an Italian living in Uruguay who was back in Rome for the final. “Yesterday was an explosion of joy. I’m happy.”

Many Italians saw Euro 2020 uniting the country to relaunch after spending most of the past 16 months in pandemic lockdown. Italy has recorded more than 127,000 known COVID-19 deaths, the highest in the 27-nation European Union.

“It’s been a complicated year for everyone but especially for us who were one of the first countries hit. This is a signal of a new beginning,” said Michela Solfanelli, a 30-year-old event producer based in Milan.

Most virus restrictions have been lifted since the spring and those that remain were largely ignored by the mass of fans who danced overnight in the streets of the capital chanting, “We are champions of Europe.”