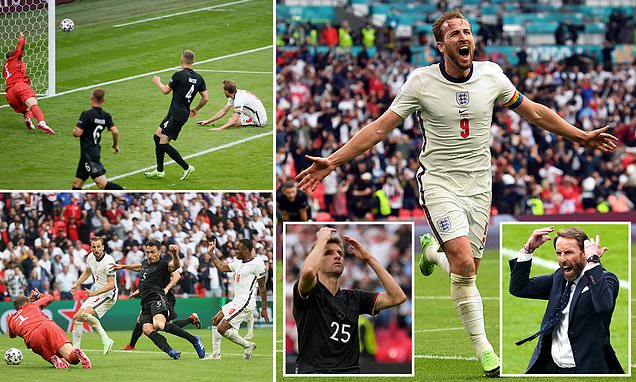 At the start of any international tournament, the phrase ‘it’s coming home’ starts to circulate among the English public, at first more tongue in cheek than anything else.

But after England sealed their spot in the quarter-finals of the European Championships, and with the route to the final that follows, there is now an undeniable sense of belief behind the statement.

Gareth Southgate’s England, who reached the semi-finals of the World Cup just three years ago, are now once again on the precise of greatness, after goals from Raheem Sterling and an under-pressure Harry Kane fired the Three Lions to a 2-0 victory.

With the emphatic win, England – who are yet to concede in any of their four games to date – will play one of Sweden or Ukraine, who go head-to-head shortly after the final whistle, for a place in the semi-finals.

Should England progress to the final-four, Southgate’s side will play one of the Czech Republic, who they have already beaten in the group stages, or Denmark, who on paper are an easier test than Germany.

England were under immense pressure to perform ahead of the game, and there was certainly an abundance of fans worried by Southgate’s team selection, after he opted to revert from four at the back – as was seen throughout the group stages – to a back three, which was utilised during the 2018 World Cup.

However, the result certainly justified the selections, and the England fans took to Twitter to express their delight after the game.

The omission of Jack Grealish was a particular bone of contention prior to the match, having provided the vital assist to Sterling’s winner against the Czech Republic last week. And there will again be calls for him to start in the quarter-finals, after he made a dramatic impact from the bench once more.

Meanwhile, though his inclusion was no surprise, Kane came into the game with the weight of the world on his shoulders having failed to perform in any of England’s group stage matches.

And the England captain received widespread criticism at half-time from the likes of Jamie Carragher, Jermaine Jenas, Alan Shearer and an abundance of fans, after he failed to convert perhaps his best opportunity of the tournament to date.

However, his second-half header – which all-but secured England’s passage to the quarter-finals – was enough to convince the fans to go back on their words.

Additionally, there had been question marks over Sterling once more, despite scoring both of England’s two goals of the tournament prior to the match. But the forward once again silenced any remaining doubters, with another hugely important goal.

And with England progressing to the quarter-finals, there are a number of notable names who certainly think it’s coming home.