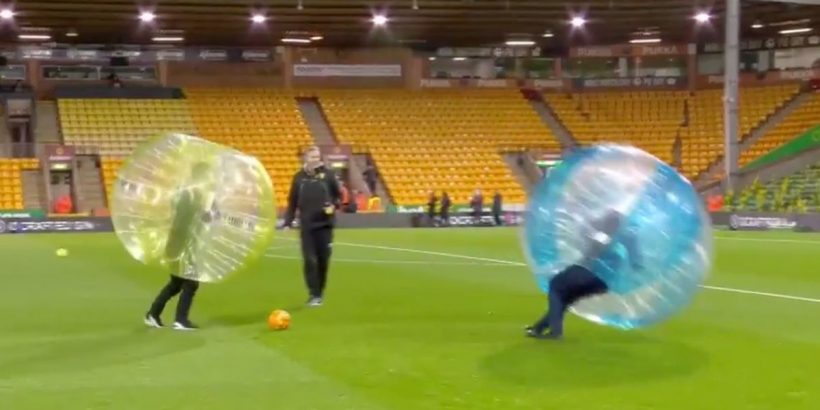 Jamie Carragher once branded Gary Neville a 'coward' as the two Sky Sports pundits went head to head in a game of zorb football.

The duo were appearing as pundits for a Friday night clash between Norwich and Watford at Carrow Road in 2019 – and ahead of the match, the pair participated in a light-hearted game of 'zorb' football.

Neville ran out 2-1 winner, but it was the hilarious comment with scores tied at 1-1 that captured the attention of the footballing world.

"Oh come on, you coward," the former Liverpool defender called out at Neville, who remained rooted on his line. After calling out the Manchester United legend, Carragher attempted to cheekily chip his colleague.

However, it was Neville who was able to lift the ball over Carragher to find the net, after the pair had smashed into each other on numerous occasions.

And Carragher then hilariously broke the match down for Sky Sports viewers: "Not good enough Kelly [it] certainly wasn't, and we're going to look at it now.

"I win the first challenge, but I become too emotional, and I'm worried about knocking Gary into the stand, as I did before, and I'm too high didn't get low enough, and I end up on my backside."

Who are your favourite Sky Sports pundits? Let us know in the comments section Watford followed in the footsteps of Neville, and they claimed their first win of the 19/20 season later that evening.

Goals through Gerard Deulofeu, who scored after 76 seconds, and Andre Gray pushed the game out of Norwich's reach.

It was the Hornet's first win of the season, and the result lifted them off the bottom of the table.