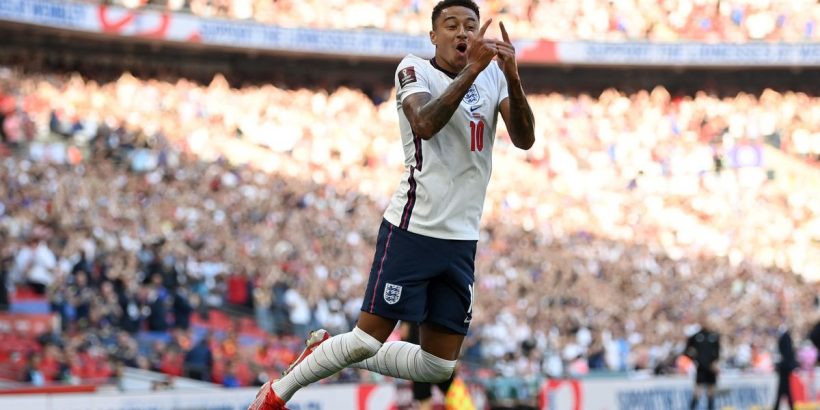 Lingard, 28, gave the Three Lions the lead in the 18th minute at Wembley with a classy left-footed finish into the bottom corner of the net.

The delighted winger, who missed out on England's European Championships squad, then performed Ronaldo's trademark 'Siuuu' jump while making a 'J-Lingz' sign with his hands.

Supporters loved the cheekiness of the celebration, but some questioned what the Portuguese will think of it when he meets Lingard for the first time after the international break.

One person said: "Lingard did his version of the Ronaldo celebration after scoring against Andorra fully knowing he will be looking Ronaldo in the face in less than a week? What a f***ing monster. I wish I had this man's confidence."

Someone else added: "Lingard dropped the siuuu celebration. Ronaldo influence in effect already."

What did you make of Lingard's celebration? Let us know in the comments section.

Another person joked: "Ronaldo making Lingard score his first goal for England since 2018. Most influential man on earth."

And a fifth Twitter user posted: "Crying at Lingard doing the Ronaldo celebration. No wonder he didn’t wanna go West Ham. He’s staying at #mufc for vibes and the social media interactions."

Lingard will be champing at the bit to play alongside Ronaldo at Old Trafford – but his opportunities will be limited.

The midfielder has made just one appearance for the Red Devils so far this term, coming on as an 86th minute substitute in United's 1-1 draw with Southampton last month.

He didn't pull on the famous shirt once last season and spent the second half of the campaign on loan at West Ham, scoring nine goals in 16 Premier League games at the London Stadium.

Following the arrivals of Ronaldo and Jadon Sancho, it will be even more difficult for Lingard to get game time at Old Trafford this term.

United fans will be hoping to see plenty of CR7's 'siuuu' celebration following his move from Juventus.

The 36-year-old started doing his trademark move during his time at Real Madrid and recently revealed it was inspired by a game against Chelsea.

He said: "Well, I was in the US and we played against Chelsea and I don't know where it came from. I just scored and I went, 'sii!'

"But it was natural, to be honest.

"After that, I started doing it and I feel like the fans, when they see me they're like 'sii' and I was like, 'wow, people remember Cristiano because of the sii,' so I continued like that."