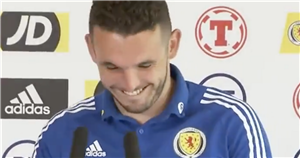 John McGinn mocked Cristiano Ronaldo for his Coca-Cola snub on Thursday by joking that he was disappointed to only be offered water in his own Euro 2020 press conference.

The Scotland midfielder was in high spirits ahead of their crunch Group D encounter against England at Wembley on Friday, getting a laugh from the journalists that were present.

The comment came in relation to Ronaldo's decision to move two bottles of Coke to the far side of the table and out of camera shot this week, telling those watching to drink water.

In addition, Paul Pogba of France then decide to move an alcohol free Heineken below the table following their narrow win over Germany due to his Muslim faith.

Following those incidents, McGinn said ahead of his conference: "Nae Coke?"

After the initial complaint by the Portugal skipper, Coca-Cola's share price dropped from $56.10 to $55.22, with the market value dropping $4bn to $238bn, before slowly rising.

Italy’s Manuel Locatelli also got involved, jokingly moved a bottle of Coke to one side after his fine individual performance against Switzerland on Wednesday.

Bypassing the incident, Ronaldo later told his 300m Instagram followers: "You have to know how to suffer, fight to the end and always believe with all your strength.

Was Ronaldo right to move the bottles? Let us know in the comments. "There are no easy opponents or games won straight away.

"The European Championship is a luxury stage where only the best of the best are present and where every victory has to be won with all the determination and selflessness. Big win, team!"

With Aston Villa's McGinn saying of England: "We compete against these guys week in, week out in the Premier League.

"It's about passing that message on to the guys based in Scotland, that we can more than compete. They're an excellent team, but if we play to our capabilities we will cause England a lot of problems.

"They've got strength in depth, but for the first time in a long time so have we. It's about focusing on us and giving England something to think about. We will not be fazed going down there, not one bit.

"When I looked at the record between Scotland and England, I was surprised at how tight the results were.

"The English media would have you believe that the gap is humungous. They've got world superstars throughout their squad, but we've got a few wee superstars in our team as well.

"It's up to us to prove that. The game can't come quick enough."